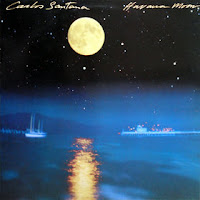 This month marks the thirtieth anniversary of the release of Havana Moon, the third solo release from Mexican-American rock guitarist Carlos Santana. It charted at number 84 in the UK, number 32 in Australia, number 31 on the US Billboard Hot 200, number 16 in the Netherlands, and number 6 in Norway and Sweden.


I had not heard any of this album prior to doing this review, so this will all be a first-impression look at it.

Side one opens with the warning “Watch Your Step”. The song mixes a classic rocking riff with a dash of Latin flare with amazing results. My feet were instantly tapping right from the start and did not stop for the entire four minutes. It is a solid, high energy opening track.

The instrumental “Lightnin’”, the B-side to the title track single release, is a joint composition between Santana and Booker T. Jones.

“Who Do You Love” was a hit song for Bo Diddley in 1956. Santana gets some assistance from the Fabulous Thunderbirds on a vibrant cover that infuses some Tex-Mex into this classic early rocker. This one is definitely my favorite track on the album because of its upbeat energy.

“Mudbone” was the B-side to the single for “They All Went to Mexico”. This gritty instrumental jam, at close to six minutes, is the longest track on the album.

Booker T & the MGs join in on “One With You”, a smooth jazz instrumental track that was also written by Booker T. Of course, Santana has a great guitar solo here.

Side two starts with “Ecuador”, a short piece with exotic music and tribal chants. I actually kind of wish there was more to it than just one minute and fifteen seconds.

“Tales of Kilimanjaro” opens with some beautiful piano, backed by bongo and conga percussion. Santana’s guitar comes in about a third of the way through, providing the “voice” to this instrumental piece.

The title track “Havana Moon”, written by Chuck Berry, is next. Released as a single, this cover is given an appropriate Latin swing.

“Daughter of the Night” saunters in next with an urban R&B sound.

“They All Went to Mexico” is a duet with Willie Nelson. As a single, the track went to number 8 in Belgium and number 7 in the Netherlands. The lyrics are about a man facing death and his reflection on his long life. While I like the music on this one, I feel like Nelson was just phoning in the vocals; they lack an emotional depth that I felt this one could have used.

“Vereda Tropical” closes things with Carlos teaming up with his father Jose Santana. Jose plays violin and provides the vocals on this song with which serenaded his wife once following an argument.

Havana Moon features a varied mix of music, all tied together with a Latin flavor for which Carlos Santana is known. Some of it works better for me, and I probably would have broken up the instrumental heavy first-side by shuffling a few tracks with those on the second side. Still, it was a pretty good way to spend forty five minutes of my listening time for the day.
Posted by Martin Maenza at 4:30 AM