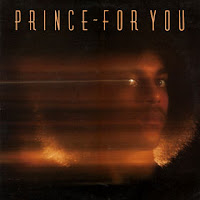 Today (April 7th) marks the thirty-fifth anniversary of the release of For You, the debut album of Minneapolis mega-musician Prince. At age 19, he composed, arranged and produced the entire album. He also played all the instruments on the record. It peaked at number 163 on the US Billboard Hot 200.


Side one opens with the a cappella title track “For You”. The short track has an ethereal quality to it as he harmonizes with himself.

“In Love” was the B-side to the second single. The track has a bouncy disco beat to it while the lyrics contain some mild sexual innuendo.

“Soft and Wet” was the debut single; it peaked at number 92 on the US Billboard Hot 100 and number 12 on the US Billboard R&B chart. This is the only song on the record with a co-writing credit; producer/songwriter/engineer Chris Moon, who helped Prince to be discovered, assisted with the lyrics. This is my favorite track on the album, thanks to its strong dance beat and very catchy synth hooks.

Next up is the ballad “Crazy You”. It features a plopping, jazzy like rhythm to it.

“Just as Long as We’re Together”, the second single, only reached number 91 on the US Billboard R&B chart. It takes advantage of the disco elements prevalent in R&B and dance music at the time. The album version of the track clocks in at nearly six and a half minutes in length, allowing for some funky instrumental sections.

Side two begins with “Baby”, a ballad about a positive acceptance of an unplanned pregnancy.

“My Love Is Forever” drops back to the pop-disco category with another mid-tempo tune about dedication and commitment.

The B-side to the first single was “So Blue”. This melancholy tune is performed on acoustic guitar with some additional light synthesizer backing.

“I’m Yours” closes out the record on a big, rocking note and includes some searing guitar solos.

As a huge Prince fan, this debut was a must for my collection. The first copy I had of For You was on a cassette that I picked up in the mid-80’s; in the 90’s, I replaced it with a CD version. While I don’t listen to this one as much as I do some of his later albums, it shows that right out of the gate that he knew his way around a studio and could put together a solid collection of music that touched upon a number of genres.
Posted by Martin Maenza at 4:30 AM

Email ThisBlogThis!Share to TwitterShare to FacebookShare to Pinterest
Labels: 70's, debut, For You, music, Prince