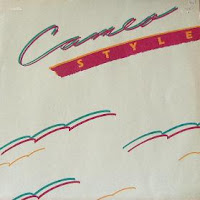 Today (April 11th) marks the thirtieth anniversary of the release of Style, the ninth studio album from R&B/funk band Cameo. Following a little more than a year after their previous release Alligator Woman (click here for that review), this 1983 record charted at number 53 on the US Billboard Hot 200 and number 14 on the US Billboard R&B charts.


The group dynamic and sound changed along with their move to the Atlanta Artists label. The band was now down to four members, with Kevin Kendrick coming on board. They also began to use more electronic instruments (keyboards, synthesizers and drum machines) with this record.

Side one opens with the seductive, sexually charged “Aphrodisiac”.

“This Life Is Not For Me” hits like a funky epiphany as the singer realizes it is time to make a change.

The mid-tempo “You’re A Winner” is another of the band’s examples of positivity, encouraging the listener to look for the good things in life and celebrate them over the bad.

Elvis Presley had a huge hit with “Can’t Help Falling In Love”, written by Hugo Peretti, Luigi Creatore and George David Weiss, from his 1961 album Blue Hawaii. Cameo takes this classic, gives it a soulful makeover and turns it into a slow dance number for a whole new generation.

The instrumental “Interlude (Serenity)” incorporates the sounds of the ocean and a gentle guitar for a minute or so as a rest before the second side commences.

Side two starts with the title track “Style”. As the first single, this pumping party track went all the way to number 14 on the US Billboard R&B charts. This track really got me moving, and it reminds me of the Minneapolis sound that was popularized by Prince and the Time in the early 80’s. It is definitely my favorite track on this record so far.

The party keeps going with the percussion-heavy and bass-thumping “Cameo’s Dance”.

“Let’s Not Talk Slot” continues things with a fun and fast number.

The second single “Slow Movin’” stalled at number 47 on the US Billboard R&B charts. This one, about taking your time for maximum satisfaction, manages to create a slinky stomp of a groove.

The album closes with a ballad. “Heaven Only Knows” is great for a slow-jam mix designed for dancing intimately close.

As I noted previously when talking about Cameo, I was late to discovering their music. The songs found here on Style were definitely right in line with the R&B based dance music I totally got into from the mid-to-late 80’s. This one would make another fine addition to my music library in the future, if only it were available digitally for purchase.