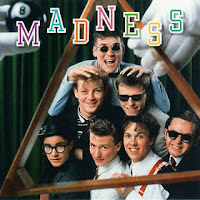 This month marks the thirtieth anniversary of Madness, a self-titled, US exclusive compilation album from the British ska-pop band. The goal was to take advantage of the popularity the group was having with one of their singles that was popular on MTV at the time. Seeing as how the record rose to number 41 on the US Billboard Hot 200, this was a good move for the label to make at the time.

The dozen tracks were taken from the earlier albums by Madness, most which were unavailable in US record stores without some kind of specialty import ordering.


Side one opens with the 1982 hit “Our House”, which appeared on 1982‘s The Rise & Fall (click here for that review - I won't recap all those details for the tracks here again). It was the band’s highest charting US single, reaching number 7 on the Billboard Hot 100.

“It Must Be Love” was a 1981 single for the band and was available on their earlier compilation Complete Madness. It was the band’s first single to chart in the US at number 33 on the Billboard Hot 100; it also charted at number 43 in the Netherlands, number 21 in New Zealand, number 6 in Australia, number 5 in Ireland and number 4 in the UK. That bouncy piano on the opening instantly pulls me into this song about professing one’s feelings and I will end up singing right along. The local college station played this one quite a bit when I was listening during 1982 and 1983.

From the album 7 comes the 1981 single “Shut Up”, which went to number 25 in the Netherlands, number 7 in the UK and number 3 in Ireland. This up-tempo track tells of a man who professes he has been mistaken for someone else behind recent criminal activity, even though he is in fact that one who was responsible.

“House of Fun” was also from Complete Madness. This 1982 single went to number 34 in the Netherlands, number 23 in New Zealand, number 5 in Australia, and number 1 in both the UK and Ireland. This ska heavy song is about a young man who, upon turning age sixteen, decides to visit a sex shop.

Side two kicks off with “Night Boat to Cairo” from 1979’s One Step Beyond…. The horn effects at the start are very cool, sounding just like that of a big steamer ship. In fact, the horn section gets a very nice spotlight on the entire track.

“Rise and Fall”, from The Rise & Fall of course, is next. Also from that same album came “Blue Skinned Beast”.

Going back to 7, we get “Cardiac Arrest”, a story of a man whose life has to change after a heart attack. This 1982 single went to number 26 in the Netherlands, number 14 in the UK and number 4 in Ireland.

“Grey Day”, also from 7, charted in 1981 as a single at number 18 in the Netherlands, and number 4 in both Ireland and the UK. It opens with some ominous tones, setting a perfect mood for this dark and brooding number.

The record closes with “Madness (Is All in the Mind)” from The Rise & Fall; it was the B-side to the single “Tomorrow’s (Just Another Day)”.

For someone like me who grew up in the States, Madness was a good introduction to the band and many of their big hits from the previous few years. I am kind of surprised that “One Step Beyond” was not included on this collection though.
Posted by Martin Maenza at 4:30 AM

I bought this one, too. Was frustrated that "One Step Beyond" wasn't on there because that was my Madness jam. Imagine my surprise when I found the One Step Beyond album in the import sale bin on my next trip to the record store. Paid less for it than the Madness album!

I can see the frustration. I am surprised "One Step Beyond" was not on it either. At least your record store had decent imports. My small town one had very limited selection. When I went off to college in a much larger city, I discovered an amazing record store to show (House of Guitars, in Rochester NY).