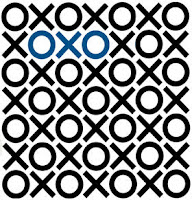 In 1983, four musicians (three from Orlando, one from Los Angelos) got together to form the dance-rock band OXO. The group was made up of Ish “Angel” Ledesma (former lead singer of Foxy), Orlando Nuñez (guitar), Frank Garcia (bass) and Freddy Alwag (drums).

The group put on out one album in April of 1983 entitled OXO before they broke up a year or so later. That makes it a very rare album, only available on vinyl. Thanks to the Internet, today we will give this one a spin in honor of its thirtieth anniversary.


Side one opens with the hit single “Whirly Girl”, a song about a gal who has had many amazing experiences. As the first single, it charted at number 28 on the US Billboard Hot 200 and its video was featured on early MTV rotation. This song has a fantastic rhythm, full of high energy, and wonderful harmonies on the chorus. This was a dance favorite of mine during 1983 - a guaranteed workout.

The B-side to the first single was “Dance All Night”, a light-weight bouncy number that suggests a way to pass the nocturnal hours.

“My Ride” was released as the second single; this ode to a favored form of transportation had a solid new-wave groove to it.

“Wanna Be Your Love” is next.

“In The Stars” pares a dance groove similar to the opening track with the desire for interplanetary exploration. This might have made for a good follow up single.

Things slow down to end the first half with “You Make It Sound So Easy”, a song about a couple who are forced to spend time apart.

Side two beings with “Waiting For You”, the B-side to the second single. This one about finding the perfect love changes things up a bit by using a Latin swing.

“I’ll Take You Back” is another ballad that includes some strong vocal harmonies.

“Love I Need Her” follows.

“Runnin’ Low” closes things off with a train-down-the-tracks kind of bass and drum rhythm. This is another track I liked from here.

There were four different versions of the liner jacket created, each with a similar pattern but varying with the color of the band’s name (red, blue, yellow and green).


OXO had some potential on the new-wave dance scene; I found a number of tracks from their debut to be as intriguing and fun as the one big hit for which they were known.
Posted by Martin Maenza at 4:30 AM

Loved the two Foxy albums Get Off (1978) and Hot Numbers (1979) and had high hopes for the OXO project but after hearing "Whirly Girl", I took a pass. Did get back into Ish's work with his wife Lori in the girl group Company B - their song "Fascinated" is a late 80s, Latin freestyle gem.

I did not realize that Lori from Company B was married to Ish. I was a huge Company B fan! Saw them "perform" (i.e. sing to the musical track) in a local Rochester club in late 1987. I still enjoy that debut album.

Where can I find "Back in Town" - been searching for years!!!

No clue. That was one of the tracks I had not heard - thus no comments for it.