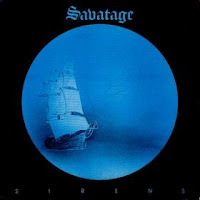 The American heavy metal band Savatage was formed by Florida brothers Criss (guitars) and Jon (vocals) Olivia in the late 1970’s. Joining them were bassist Keith Collins and drummer Steve Wacholz. This week (April 11th) marks the thirtieth anniversary of the release of Sirens, their first studio album.

I decided to go with the original vinyl cover, since I do things old-school here on the blog. The later 1985 vinyl re-release and 1988 CD release have a more elven/fantasy type drawing to it that seems like a cross between The Hobbit and Lord of the Flies (see below).


Side one starts with the title track “Sirens”. I like the opening tolling bells with the single guitar to set a mysterious nocturnal mood. The song then explodes with a mythological tale about the sea-songstresses that tricked men to their doom.

“Holocaust” opens with a sweet shredding guitar solo. There is also a very cool siren effect, done also with guitars, about midway through that brings to mind an air-raid siren. The whole thing summons up a great imagery of a terrifying nuclear Armageddon.

“I Believe” is a firm statement in the belief of life beyond the Earth. It is adamant that we are dooming the planet and will need to seek refuge in the stars. The sci-fi concepts with metal mix quite well.

“Rage” is a high-octane fueled emotional outburst. I am totally impressed with the relentlessness of Wacholz’s beats and the matching guitar licks.

Side two opens “On the Run”, with a slow burn to its music which builds as the track progresses.

“Twisted Little Sister” is a sexually charged number about a hot little number who catches the singer’s eye but could turn out to be a whole lot of trouble too.

“Living For the Night”, an epic ode to nocturnal activities, is next.

“Scream Murder” has a sinister stalking to it, giving that heart-racing feeling of being pursued by a killer on the rampage.

“Out On the Streets” closes things out with the album’s sole ballad, showing that Savatage can deliver the power even in a more controlled manner. 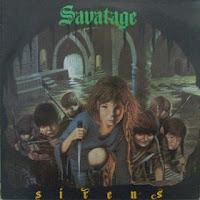 The first I had ever heard of Savatage was when I was compiling the list of albums from 1983 for review this year. Back in the day, they were not a band that was on my musical radar at all; my only exposures to heavy metal mostly came from the album-oriented rock station from Buffalo and from hanging out at my best friend‘s house on weekends.

However, after giving Sirens a listen, I have to say I enjoyed it quite a bit. The band puts out some top notch rock on this debut. Jon’s vocals are amazing, showing great range and transitioning with ease from one end to the other (and avoiding screeching which in metal turns me off quick). Criss and Collins lay down some impressive axe playing, and Wacholz drums like a man possessed. CD copies are tough to come by without paying a handsome price though. It is definitely an album I would download if it were available digitally.
Posted by Martin Maenza at 4:30 AM