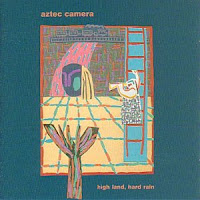 This month marks the thirtieth anniversary of the release of High Land, Hard Rain, the debut album from the Scottish group Aztec Camera. It charted at number 154 on the US Billboard Hot 200 and number 22 in the UK. The line-up for the band at the time was Roddy Frame (vocals, guitar and harmonica), Bernie Clark (piano and organ), Campbell Owens (bass) and Dave Ruffy (drums).


Side one opens with “Oblivious”, the lead single from the album for 1983. It charted in the UK initially at number 47 and then again at number 18 upon re-issue late in the same year. This one has a tropical swing to it, from the percussion to the guitar that gives it a light and airy element that I enjoy. I remember this one from listening to college radio and the early days of MTV. It came back into my life again in the mid-90’s as part of a Rhino Records new-wave compilation set. This is very likely the song most folks know if they are at all familiar with the band.

It is from the chanting near the end of “The Boy Wonders” that the album gets its title. I really like Frame’s flourishing guitar and Ruffy’s march-like drums at the start of this track.

The second single “Walk Out to Winter” stalled at number 64 on the UK charts. This beautiful pop song is about meeting someone and then having him be there, still in love, some time later. I can see the references to summer and winter being both traditional calendar ones as well as metaphors to phases in a lifetime.

“The Bugle Sounds Again” slows things down to tell of clandestine meetings between young lovers for opposite factions in a conflict that are often interrupted.

‘We Could Send Letters” sticks with the slower tempo with another emotional rich song about the complexities of love and how the guy would settle for just exchange letters with a love he cannot have physically.

Side two begins with “Pillar to Post”, one the songs the band released prior to their first album (this one from late 1982). This one has a very bouncy beat to it.

Frame‘s voice stands innocent and exposed at the opening of “Release”, accompanied only by his acoustic guitar. The rest of the group joins in at the chorus for a jazzy little number.

“Lost Outside the Tunnel” is filled with isolation and loneliness that comes after a big break-up.

“Back on Board” is a cry for help, to find a way to move on after a tragedy. The rhythms have a bit of a Motown vibe to them, and it also features a harmonica solo by Frame that calls to mind Bob Dylan.

“Down the Dip” closes out the album with an acoustic ode to hanging out at a local neighborhood pub.

What I like about Aztec Camera and High Land, Hard Rain is that the music very much stood out against the rest of the field in 1983. When everyone was looking at ways to embrace the electronic sounds of the new-wave, they were doing things old school. What results is a pop album that has a very 60’s throwback feel. It is refreshing.

This one was certainly a tough one to track down, especially here in the States. You had to rely on import sources to pick it up. Luckily, it has been re-mastered on CD just in time for this big anniversary. And that is good, because good pop music always deserves to be heard.
Posted by Martin Maenza at 4:30 AM