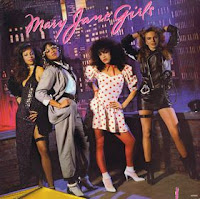 This month marks the thirtieth anniversary of the release of the self-titled debut album from the Mary Jane Girls. The project came together when Rick James wanted to get his former background singer Joanne “Jo Jo” McDuffie a recording contract with Motown. The label wanted a girl group project, so James concocted the Mary Jane Girls.


He filled the group out with other gals (Cheryl “Cheri” Bailey, Candice “Candi” Ghant, and Kimberly “Maxi” Wuletich) who had limited vocal experience and then supplemented in with backing vocals by Maxine and Julia Waters. James along with Levi Ruffin, Jr., Greg Levias, Danny LeMelle, Oscar Alston, Tom McDermott and Alan McGrier provided the musical accompaniment.

Side one was labeled the “Party Side”. It opens with “Candy Man”, the lead single; it charted at number 101 on the US Billboard Pop charts, number 60 in the UK and number 23 on the US Billboard R&B charts. This one has a bouncing dance beat supported by slinky synths, perfect for the weekend dance club sets.

The third single was “Boys”; it peaked at number 102 on the US Billboard Pop charts, number 74 in the UK and number 29 on the US Billboard R&B charts. This one, which objectifies men and calls them out on their sometimes childish actions, has a very funky bass grind at its foundation.

“Prove It” keeps the beat going while insisting that the man step up and spend his money showering her with gifts.

“Jealousy” was released as the fourth and final single in 1984. It stalled at number 106 and number 84 on the US Billboard Pop and R&B charts respectively. I like the bouncy shuffle to this one.

Side two was labeled the “Cool Out Side”. It begins with the ballad “You Are My Heaven”, the B-side to the fourth single. The vocal harmonies have an angelic quality to them.

“On the Inside” lays down a sensual groove that was perfect for slow dancing. It also really showcases McDuffie’s vocal talents. This one is definitely my favorite track on side two.

The second single “All Night Long” reached number 101 on the US Billboard Pop charts, number 18 in Ireland, number 13 in the UK and number 11 on the US Billboard R&B charts. This one, which promises a night of utter satisfaction, actually has more of a mid-tempo to it that sets it apart from the rest of the slow-jams on this half of the record. It features a sultry saxophone solo as well.

The ballad “Musical Love”, the final track, also served as the B-side to the second single.

Growing up and going to college in an hour or so radius from the group’s hometown of Buffalo, NY, the Mary Jane Girls were definitely a regional favorite. Many of the tracks from Mary Jane Girls could be heard in the clubs. I remember going to a Buffalo night spot with my friend Jim around Christmas of 1986 and these tunes were still on the local deejay’s play list.
Posted by Martin Maenza at 4:30 AM