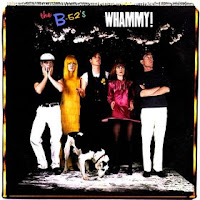 Today (April 27th) marks the thirtieth anniversary of the release of Whammy!, the third full-length studio album from the B-52’s. It charted at number 97 in Australia, number 42 in New Zealand, number 33 in the UK, and number 29 in Sweden and on the US Billboard Hot 200.


Side one opens with “Legal Tender”. As the first single from the album, it stalled at number 81 on the US Billboard Hot 100 yet climbed all the way to number 9 on the US Billboard Dance chart. The lyrics tell of the exploits of some counterfeiters, printing up dollar bills in their basement to counter the rising economic prices. Kate Pierson and Cindy Wilson definitely sell their earnestness of this financial endeavor.

The second single “Whammy Kiss” also charted in the Top Ten of the US Billboard Dance charts.

“Song for a Future Generation” was the third single from the album. It went to number 63 in the UK and number 9 on the US Billboard Dance charts. All five members of the band provide vocals on this one, especially during the dating-service like introductions. You have to wonder how much of their “likes” are rooted in reality (one would hope so). The lyrics take a satirical look at heterosexual dating.

“Butterbean” closes out the side with Fred Schneider extolling the virtues of a regional favorite legume.

Side two starts with “Trism”, the B-side to the third single. I have no idea what the made-up word title is supposed to mean, but that’s okay. I tend to focus on the beat and rhythms of this danceable track.

“Queen of Las Vegas” tells the tale of a broken home that was the result of gambling addiction.

“Don’t Worry”, a cover of Yoko Ono’s song “Don’t Worry, Kyoko (Mummy’s Only Looking for Her Hand in the Snow” from the 1971 album Fly, was the seventh track on the original vinyl of the album. Due to legal issues with Ono, it was replaced on future prints and on the CD release. Prior to doing this review, I had not heard this track (I did not own this one on vinyl). This song is really out there and quirky, not unexpected given where it came from. It is almost fitting though for the B-52’s to cover it.

The replacement track “Moon 83” was the B-side to the first single. This was a remake of the group’s earlier song “There’s a Moon in the Sky (Called the Moon)” from their 1979 debut The B-52’s.

“Big Bird” is a rapid-fire, bordering on paranoia number with the addition of horns by David Buck and Ralph Carney.

The album closes with the instrumental track “Work That Skirt”.

Overall, I like the blending of the synths and guitars courtesy of Keith Strickland and Ricky Wilson on Whammy!. It gives the album an interesting vibe and plenty of nuances to pick up on during subsequent listens. The up-tempo, party-centric focus reminds me of the first two releases by the B-52’s.

I am certain my first exposure to this album came from college radio as the group was a favorite on campus. It was not until a couple years ago though that I added the deeper tracks from it to my digital music collection (the singles were on the greatest hits CD I had owned since the 90’s).

If you are interested in more of my B-52’s reviews, check out the links below:

- for their first-ever live album release 2011‘s With the Wild Crowd!, click here. And for the DVD release of that show, click here.
Posted by Martin Maenza at 4:30 AM