Rick James - Come Get It! 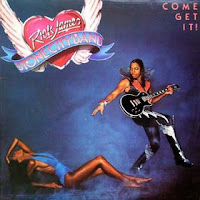 
Side one starts with “Stone City Band, Hi!”, a song that sets up as if played before a live screaming audience. This mid-tempo groove opens with a funky bass riff and smooth horns.

“You and I”, the debut single, went to number 46 in the UK, number 13 on the US Billboard Hot 100, number 3 on the US Billboard Dance chart, and number 1 (for two weeks) on the US Billboard R&B chart. The album version of the track simmers along on a low boil for eight full minutes, making for an excellent extended dance jam. As soon as this one starts, I’m ready to get up and boogie. For me, it is the highlight of the record.

“Sexy Lady” keeps the beat steady and strong on this urban tale of flirtation.

“Dream Maker” was the B-side to the second single. The ballad takes a slow, sensual route to seduction. James goes from a spoken word natural voice to a falsetto and back again with great ease.

Side two begins with the mid-tempo “Be My Lady”. My favorite part of this one is the backing “ooo-oooa” (very disco sounding).

The second single “Mary Jane” stopped at number 41 on the US Billboard Hot 100 yet reached number 3 on the US Billboard R&B charts. The song celebrates James’ drug of choice at the time; he does it in such a way to personify marijuana as if it were a real live woman.

The B-side to the debut single was an edited version of “Hollywood”; the album track goes for seven and a half minutes in length. This slow ballad is a farewell note from a guy leaving home to seek his fame and fortune in the California city of stars. It does get a touch reggae in the rhythms near the end.

The album then closes with “Stone City Band, Bye!”, a little over a minute long instrumental reprise of the opening track.

Rick James is a native-born son of Buffalo, NY, the big city closest to where I grew up. As such, I have always been a fan of his music. I picked up Come Get It! in digital format about a year and half ago as I was long overdue to owning a copy. This debut was a good marriage of funk and disco, adding a new element to the dance floors back in the day.
Posted by Martin Maenza at 4:30 AM