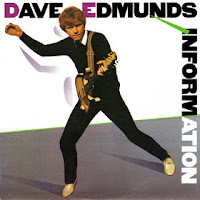 This month marks the thirtieth anniversary of the release of Information, Welsh rocker Dave Edmund’s second solo album on the Arista label from 1983. It charted at number 92 in the UK and number 51 on the US Billboard Hot 200.


Side one starts with “Slipping Away”, a track written and produced by Electric Light Orchestra’s Jeff Lynne. The single charted at number 60 in the UK, number 39 on the US Billboard Hot 100 and number 7 on the US Mainstream Rock chart. You can hear Lynne’s influence on this - from the synth effects to the backing harmonies, but Edmunds’ signature guitar sound is there too. It makes for a great mix, garnering a four-star rating from me in my music library. I remember this one fondly from the radio and early days of MTV. It reminds me of cruising around in the summer when I was eighteen years old, the time it was all over the airwaves.

“Don’t You Double”, written by American rockabilly singer Moon Martin, features a driving drumbeat courtesy of Dave Charles. And, of course, Edmunds’ axe slices through everything in its path.

“I Want You Bad” is a cover of a tune from NRBQ that appeared on their 1978 album At Yankee Stadium. Edmunds really expresses that heartfelt longing.

“The Watch on My Wrist” is next.

“The Shape I’m In” has a down-home Louisiana Zydeco vibe thanks to Geraint Watkins on the accordion.

Side two opens with the title track “Information”. This second single stalled at number 106 in the US Billboard chart. This is the other track that Lynne helped produce, and it has a similar magic that the opening track from the first side has. This one is all about a guy trying to find out the details on a mysterious woman who has suddenly showed up.

“Feel So Right”, with a nod musically to Buddy Holly, captures that indescribable feeling of being with that perfect person on a perfect night.

The next track, “What Have I Got to Do to Win?”, was the B-side to the second single.

The B-side to the first single was “Don’t Call Me Tonight”. It sticks with a more straight-forward early rock sound.

“Have a Heart”, written by bassist John David, closes out the album. The singer pleads with his girlfriend to give him another chance. 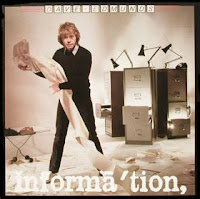 From what I have read, Information really has a polarizing effect on listeners. Some really love it as it helps Dave Edmunds shift into the new-wave sound of the early 80’s. Others feel this is an affront to the rocker’s more classic roots. I am more of the camp that it mixes both sounds pretty well across eleven tracks, giving the audience a bit of variety while still delivering up-tempo, rousing rock ‘n’ roll. That makes this three decade old album solid in my book.

Sadly, this one is hard to track down in the digital world; I could not find it available in any of my usual sellers. Vinyl can be found for sale on eBay and other dealers, of course. And the 1991 CD release is out there, mostly on imports, and is a bit pricy.
Posted by Martin Maenza at 4:30 AM

I recently bought a CD copy at Amazon: D.E. 7th/Information