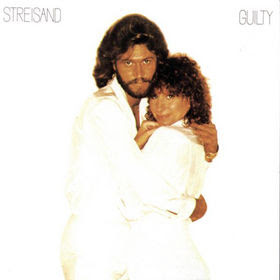 Today we will look at one of my favorite albums by this American musical legend, September of 1980’s Guilty.


As the 70’s were winding down, Streisand asked Barry Gibb to write and produce an album with her. In turn, Gibb brought on the regular Bee Gees production team of Albhy Galuten and Karl Richardson to the project along with his brothers Maurice and Robin. The finished product achieved Platinum sales status a number of times over, and went to number 1 in Australia, Austria, Canada, France, the Netherlands, New Zealand, Norway, Spain, Sweden, Switzerland, and the UK and on the US Billboard Album chart. It also ended up being nominated for the Album of the Year Grammy in 1981.

Side one opens with the title track. "Guilty", written by all three Gibb brothers, won the Grammy Award for Best Pop Vocal Performance Duo or Group. Released as the second single, it reached number 34 in the UK, number 21 in Ireland, number 13 in Canada, number 5 on the US Billboard Adult Contemporary chart and number 3 on the US Billboard Hot 100. This one has a nice slow swagger to it, thanks to the muted guitar and light percussion. Streisand’s and the Gibbs’ vocals compliment one another well.

"Woman in Love" was nominated for a Grammy Award in the categories of Song of the Year and Best Pop Vocal Performance Female. As the first single, it went to number 1 in Australia, Canada, France, Germany, Ireland, the Netherlands, Norway, Sweden, Switzerland and the UK. In the US, it went to number 1 on the Billboard Hot 100 (a spot it held for three weeks) and on the Billboard Adult Contemporary charts (a spot it held for five weeks). This mid-tempo ballad lets Streisand hit and hold some amazing notes.

The B-side to the first single was "Run Wild", another beautiful ballad. I like how the chorus builds up to a haunting fade.

"The Love Inside" was the B-side to the third single in the US. This gentle yet heartbreaking ballad about love being over is perfectly suited for Streisand’s vocal style.

Side two starts with "What Kind of Fool", another duet between Streisand and Gibb. This tale of infidelity opens with her vocals in the lead with his supporting in the background. As the third single, it peaked at number 17 in Canada, number 10 on the US Billboard Hot 100 and number 1 (for four weeks) on the US Billboard Adult Contemporary charts. This was one of those songs that I would listen to whenever I was in a melancholy mood after a break-up.

"Life Story" was the B-side to the second single. The synthesizers and percussion give this one a moody, dramatic setting.

"Never Give Up", an anthem about dedication in the pursuit of love, bounces along at a peppy pace.

The final cut "Make It Like a Memory" was also the B-side to the third single in the UK. It opens with Galuten on the piano and features a great guitar solo as well. The seven and a half minute track then closes with a sweeping orchestration.

In 2005, Streisand and Gibb made a sequel album Guilty Pleasures. The two took a similar pose for that cover as well, however it was done all in black as a contrast.

While I did not own the vinyl copy of the Guilty album, I did have a couple of the songs on 45. In the Fall of 2012 I downloaded a copy and have played the whole album through over a half dozen times since then. As a huge Bee Gees fan as well as someone who enjoys the music of Barbra Streisand too, this was a must have for me.
Posted by Martin Maenza at 4:30 AM