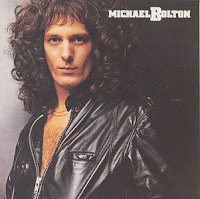 This month marks the thirtieth anniversary of the release of the self-titled studio album Michael Bolton. This Gold selling record, which peaked at number 89 on the US Billboard Hot 200, was the third studio album from the American singer. His first two, Michael Bolotin from 1975 and Everyday of My Life from 1976, were recorded under his birth name and garnered very little chart action.


I will admit right off the bat - this album was not at all what I expected (though the cover should have given me a clue - with the leather jacket and the big hair). I never knew that Bolton was the lead singer for a hard rock band in the late 70’s (Blackjack) and that they once toured with Ozzy Osbourne.

Playing guitars on the record were brothers Bob and Bruce Kulick (that latter who was also of Blackjack and would later go on to play with KISS), and on synthesizers were Aldo Nova and George Clinton. On the very short-lived promotional tour (only four shows), Kulick was replaced by Al Pitrelli (who would later go on to play with Trans-Siberian Orchestra, Savatage and Megadeth).

Side one begins with “Fools Game” which was the only single released from the album (it charted at number 83 on the US Billboard Hot 100). This one starts with a strong guitar/synth blended riff before phasing into a mid-tempo rocking rhythm. It has a Foreigner or Journey sound to it that would have been right at home on album-oriented rock stations of the early 80’s.

“She Did the Same Thing” tells the tale of a woman who breaks a guy’s heart and his buddy can relate (because he too was a victim of her love-them-and-leave-them ways).

The opening of “Hometown Hero” sounds like it could have come from an early Bryan Adams album. The lyrics tell of a musician who makes it big and then returns to the place he grew up to be welcomed and celebrated.

“Can’t Hold On, Can’t Let Go” presents that age old struggle of “can’t live with her but can’t live without her”. The guitars sear and the drums pump on this one.

“Fighting For My Life” closes out the side with more strong rock.

Side two opens with the impassioned “Paradise”. Sure, the lyrics are rock clichés but the music is solid.

Next up is a cover of the 1965 hit by the Supremes “Back in My Arms Again”. This version definitely takes the song in a different direction was some decent results.

The band changes up the rhythms a little on “Carrie”, the tale of a troubled young woman.

The record closes with “I Almost Believed You”, the record’s sole ballad. With a heavy piano base and the harmonies on the chorus, this one has a slight Meat Loaf touch to it (though Bolton‘s vocal power does not quite hit the high benchmark Meat has set over the years).

As I said before, I was surprised, pleasantly, by Michael Bolton. Having only been familiar with his late 80’s pop/soul crooning, these rock roots were totally new to me. This is one you definitely might want to check out, just to fill in on that early 80’s music experience. Who knows? You might find a tune or two you want to add to your music library like I did.
Posted by Martin Maenza at 4:30 AM