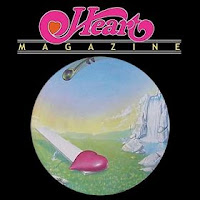 Today (April 22nd) marks the thirty-fifth anniversary of the release of Magazine, the fourth studio album by the rock band Heart. The album actually had an unauthorized original mix put out in 1977 by their first label Mushroom Records; Ann and Nancy Wilson recovered the rights to the record and reworked it for an official release a year later.


This version of the album went to number 66 in Australia, number 17 on the US Billboard Hot 200 and number 13 on the Canadian charts; it achieved Platinum sales status in the later two countries as well.

Side one begins with “Heartless”, the first single from the record. It charted at number 24 on the US Billboard Hot 100 and number 18 on the Canadian charts. The song about a cold emotionless “love ‘em and leave ‘em” woman starts out deceptively slow before breaking out with a killer guitar riff.

The B-side to the second single was “Devil Delight”, a heavier rock grinder in the vein of Led Zeppelin. The guitars by the sisters are supplemented by Steve Fossen’s booming bass.

“Just the Wine” was the B-side to the first single. This heartfelt acoustic number is a precursor to some of the tracks that would come with their album Dog & Butterfly later in the year. Ann provides the flute solo on this one.

“Without You” was the third and final single from the album. This is a solid cover of the hit single first recorded by Badfinger for their 1970 album No Dice. The vocal harmonies of Ann and Nancy work well with the lovely lyrics.

Side two starts with the title track and second single from the album. The album cut of “Magazine”, a gentle look at rock groupies, clocks in at nearly six and a half minutes. I kind of expected a lot longer of a guitar solo on this one; they likely did that when playing it live back in the day.

“Here Song” was the B-side to the third single. The acoustic number clocks in at barely over a minute and a half. For me, it comes across as just a quick idea that easily could have used a bit more meat on the bones.

A live version of the band‘s cover of “Mother Earth Blues” is next. While not anything to get overly excited about, it does give a glimpse into the band’s earlier days when they were just starting out in smaller, smoke-filled venues. It has a very raw sound to it.

“I’ve Got the Music in Me” was first recorded by the Kiki Dee Band in 1974 for their album of the same name. Heart was doing a live version of it in their early shows and included it here to close out the record. I have always been a huge fan of the original song, so I enjoyed hearing this rendition. I like the energy that they put into it.

Back in the late 1970’s, most of the Heart music I heard came from the album-oriented rock station we listened to out of Buffalo. I am pretty sure tracks from Magazine were featured, especially on rock-block weekends.
Posted by Martin Maenza at 4:30 AM