Sister Sledge - Bet Cha Say That to All the Girls 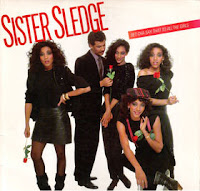 A little more than a year after their 1982 release The Sisters (click here for that review), Debbie, Joni, Kathy and Kim Sledge returned to the charts with their seventh studio album Bet Cha Say That to All the Girls. This Sister Sledge album stalled at number 169 on the US Billboard Hot 200 yet climbed to number 35 on the US Billboard R&B chart.

Today we will look at this 1983 album as part of its thirtieth anniversary.


Side one begins with “B.Y.O.B. (Bring Your Own Baby)”. As the album’s first single, it reached number 22 on the US Billboard R&B charts. This one went back to the group’s 70’s sound with a strong bass rhythm and solid dance beat. The lyrics are a warning from one woman to another - “bring your own man because my man is off-limits!”

The funky groove continues with “Lifetime Lover”, the B-side to the second single. This one is a tale about two determined to honor a commitment to one another, even though they have to spend much time apart. I like the synth keyboards and the bass lines on the bridge.

“Once In Your Life” is the album’s first ballad. It features a sultry saxophone to set the sensual scene.

The groove returns with the syncopated rhythms of “Shake Me Down”. This is a funky recollection of slipping out underage, thanks to a fake ID, to go dancing in a big city night club. I like the line “I used to be a minor on the major scene” - nice play on words. This is definitely my favorite track so far.

“Dream On” closes out the side with a swaying mid-tempo tune advising how to survive a break-up and move on to a brighter future. The lovely vocal harmonies of the four siblings shine here.

Side two starts with “Let Him Go”, released as the second single; it peaked at number 56 on the US Billboard R&B chart. The song features a strong synth line and a bit of a rocking edge that really embraces that 80’s sound. I am kind of surprised it did not do better on the charts; I really like it a lot.

The B-side to the first single was “Smile”. It advises that sometimes a simple thing like smiling can help you turn the gray skies blue. Positive attitudes are contagious.

The title track is next. “Bet Cha Say That to All the Girls” opens with some cascading synth rhythms, punctuated by powerful horns. It paints the scenario of a nightclub player who uses some tired lines to try to impress the ladies. I like how the ladies set up a great album cover to go with this one.

The second single was “Gotta Get Back to Love”, a sweet slow-tempo ballad that pleas to repair an ailing relationship.

The final track “Thank You For the Party”, a rousing mid-tempo dance number, charted in Belgium at number 27.

I had not heard much from Bet Cha Say That to All the Girls back in the day, and that is kind of a bummer for me. This is one I certainly would have picked up had the songs crossed over from the R&B charts into my listening circle. This album is right in line with my mid-80’s club dancing phase. As my music library is severely lacking on Sister Sledge songs in general, this one will have a place in my download library by the time this review posts.
Posted by Martin Maenza at 4:30 AM