Bonnie Tyler - Faster Than the Speed of Night 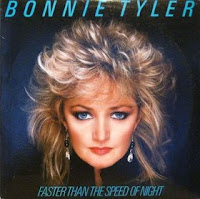 This month marks the thirtieth anniversary of the UK release of Faster Than the Speed of Night, the fifth studio album from Welsh singer Bonnie Tyler (the US release would follow in September of 1983). This Platinum seller was produced by Jim Steinman and was nominated for two American Music Awards (Favorite Rock/Pop Female Artist and Favorite Rock/Pop Single) and two Grammy Awards (Best Pop Vocal Performance Female and Best Rock Vocal Performance Female).


Chart-wise, the album went to number 24 in the Netherlands, number 20 in Germany, number 19 in Switzerland, number 12 in France, number 4 on the US Billboard Hot 200, number 3 in Sweden, and number 1 in Norway and the UK.

The musicians who performed on the album along with Tyler included Roy Bittan (on organ), Rick Derringer (on guitar), Larry Fast (on synthesizer), and Max Weinberg (on drums).

Side one begins with the question “Have You Ever Seen the Rain?”; the song was originally a hit for Creedence Clearwater Revival in 1971. Tyler’s cover as a single went to number 63 in Germany, number 47 in the UK and number 40 in France. This version has an ever-present piano foundation and shredding guitars to update it for a new listening audience.

“Faster Than the Speed of Night”, the second single, went to number 43 in the UK and number 9 in Norway. This one has all the trademark elements of Steinman’s composition, and he found another singer in Tyler who could deliver them.

“Getting So Excited”, a song about the chemistry between a man and a woman, charted as a single at number 89 in the UK. The tempo builds as the tension does lyrically.

The debut single was “Total Eclipse of the Heart”, which went to number 1 in Austria, France, Norway, the UK, and on the US Billboard Hot 100 and Billboard Country charts. The album version is nearly seven minute musical epic, full of trademark Steinman dramatic vocals and musical hooks. The melody first appeared as part of the soundtrack for the 1980 film A Small Circle of Friends for which Steinman did the score. The video too was a big MTV favorite, complete with private school boys, Gothic architecture and angels.

Side two opens with “It’s a Jungle Out There”. Tyler had a special band line up just for this song that included Paul Shaffer (on organ), Hiram Bullock (on guitar), Steve Jordan (on drums), Will Lee (on bass) and Jimmy Maelen (on percussion); they created a reggae groove that was a welcome change-up by this point on the record.

“Goin’ Through the Motions” opens with a school-yard chorus of kids, followed by an up-tempo number with good musical hooks. The lyrics tell of a relationship on the rocks, with the individuals involved just going through day to day with little emotional investment.

“Tears” is a duet featuring Tyler and Scottish singer Frankie Miller, who also wrote the song. Both singers have a similar whiskey-rasp to their voices, which allows them the blend in a perfect harmony.

“Take Me Back”, the B-side to the debut single, peaked at number 46 on the Billboard Hot 100. The percussion has a classic Motown kind-of sound to it and a Springsteen element as well. That latter part makes perfect sense as Weinberg was a big part of the E Street Band sound.

The final track “Straight From the Heart” was written by Bryan Adams and was a hit from his 1983 album Cuts Like a Knife. Tyler’s version adds a backing church-like chorus but, for the most part, sticks pretty close to the original arrangement.

I have become an instant fan of Faster Than the Speed of Night after just one listen. I easily attribute that to the fact that I have always loved the big hit single as well as Steinman’s work. This album instantly shot to the top of my to-download list; I am sure I’ll be listening to this one a good bit over the coming months and years to come.
Posted by Martin Maenza at 4:30 AM