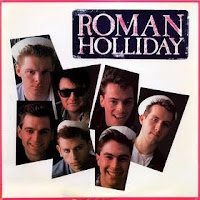 Before their first full album was released in the late Spring of 1983, the group put out a five song EP simply titled Roman Holliday; it peaked at number 142 on the US Billboard Hot 200. Today, we'll take a look at this one in honor of its thirtieth anniversary. Combining a mixture of pop and swing, they brought a lot of fun to the music scene.


The first side opens with “Stand By”, which also had a popular video that aired on the early days of MTV. It was the first single released by the group; it reached number 61 in the UK, number 54 on the US Billboard Hot 100, and number 1 on the Canadian Adult Contemporary charts. The opening is bouncy and gets my foot moving within seconds, thanks to the aforementioned swing elements. I was an instant fan after hearing this track, which gets a five-star rating in my music library.

Next up is “Motor Mania”, the third single from the group; it peaked at number 40 in the UK. The multiple part vocal harmony on the opening, I think, is pretty cool. This one harkens back to all those odes to cars from the 60’s, but with a 40’s big band sound to it. I like the finger-snapping and the stop-go pauses too. It is also a five-star track in my book.

The side concludes with “I.O.U.”, a song about a guy who is constantly running short on cash. But, as with their other songs, Roman Holliday presents it in an up-tempo way so you don’t feel so bad for the guy. I like how the horns punctuate the vocals throughout the song.

The second side of this EP advises “Don’t Try to Stop It”. This second single by the group did better in the UK (number 14) than it did in the US (number 68 on the Billboard Hot 100). You can really pick out Durno’s thumping bass and York's plunking piano on this one. The vocal harmonies by Lambert and Bonhomme are very smooth too.

The last song on the record is “Beat My Time”. It was originally released as the B-side to the “Don’t Try to Stop It” single. Sadly, this is the only track from the EP that I have not been able to locate digitally (it was never released on CD either to the best of my knowledge).

I was first exposed to Roman Holliday and a couple of these songs by listening to local college radio during my senior year of high school. The EP soon was available at the local record store for $3.99, so I quickly added it to my vinyl collection. While that record is long gone with the rest of my old vinyl, it still remains a favorite of mine and reminds me of those days in the early 80's - fun and carefree.
Posted by Martin Maenza at 4:33 AM