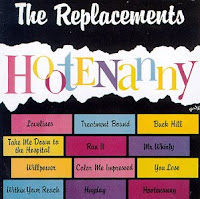 This week (April 29th) marks the thirtieth anniversary of the release of Hootenanny, the second studio album from the Replacements. The cover art for the album was done in homage to the 1963 Crestview Records compilation of folk music also entitled Hootenanny.

The line-up for the Minneapolis band at the time included Chris Mars on drums, Bob Stinson on lead guitar, Tommy Stinson on bass, and Paul Westerberg on vocals and guitar.


The title track opens side one. “Hootenanny” is different than the other tracks in that all four of the guys changed up their usual instruments (noted above); Mars plays lead guitar, Bob played bass, Tommy played guitar, and Westerberg played drums. At just under two minutes, this one mixes country, a jazz bass and screeching guitars; the juxtaposition of styles is jarring but also intriguing.

“Run It” takes the punk tradition to the extreme, going full-throttle for the entire one minute and twelve seconds length of the song.

“Color Me Impressed” adds a bit more of melody to it, underneath the heavy guitars and pulsating drums. I can see glimpses of what Westerberg’s vocals would evolve into in this one.

“Willpower” changes things up a bit, first and foremost by actually going for over four minutes. I like the slower, moodier pace to this one and the echoing effects on the vocals. I picture someone wrestling with the voice in his head, trying to find some meaning in an insane world.

“Take Me Down to the Hospital” blends screaming guitars with a rockabilly beat. This one really works for me a lot and is certainly my favorite track on the first side of this album.

With “Mr. Whirly”, the band pays tribute to the Beatles with a cover/parody of the latter’s “Oh Darling”. It is a little bit manic with lots of tongue firmly planted in cheek.

Side two begins with “Within Your Reach”. What is unique about this piece is that Westerberg performed solo on the track, doing all the vocals and playing all the instruments. I like the various layers of the instruments here and how they perfectly compliment one another.

The instrumental “Buck Hill” is next with its surf-rock sound. The only vocal is the shout outs of the title. I guess one could consider this the Replacements’ version of “Tequila”.

“Love Lines” is an interesting piece. The lyrics were taken as direct quotes from the personal ads section of the October 13th, 1982, issue of the Minneapolis newspaper City Pages. This one actually is a lot of fun all the way around. I would have liked it to have gone on about another minute longer though.

“You Lose” is kind of a bookend to the earlier “Run It”; both feature an aggressive attitude and rapid-fire rhythm.

The album closes with “Treatment Bound” which, to me, has a bit of a Bob Dylan feel to it. It could be the jangly guitar or Westerberg’s vocal delivery.

While I was familiar with the later work of the Replacements (click here for my review of the band’s 1984 album Let It Be), this was the first time I have ever heard the tracks of Hootenanny. I like the experimentation that the group was doing overall, but my favorite tracks tend to be the ones that run a longer length (three minutes or more). I found those to have a little more room to capture the listener’s attention. Many of the shorter ones seem more like knock-offs of the guys just messing around in the studio.