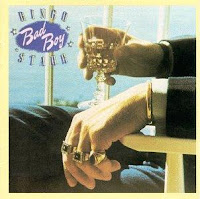 Today (April 21st) marks the thirty-fifth anniversary of the UK release of Bad Boy, the seventh solo studio album from drummer-singer Ringo Starr. The US release would come later in the year on June 16th of 1978.

The album peaked at number 129 on the US Billboard Hot 200 and number 98 in Australia.


Side one opens with “Who Needs a Heart” which was also the B-side to the second single. Starr co-wrote it with the album’s producer Vini Poncia; Poncia worked with the likes of KISS, Melissa Manchester, Leo Sayer and Tommy James also in the 70’s. It is a good pop-rock song.

“Bad Boy” was first recorded by the Jive Bombers, an American R&B group, in 1957. Starr’s cover sticks pretty close to the doo-wop roots of the tune. The odd standout here is how he extends the pronunciation of “boy” at the start of each verse (I found it a little unnerving at first but it grows on you).

The first single from the album was “Lipstick Traces (On a Cigarette)”, Starr’s cover of the 1962 song by New Orleans singer Benny Spellman. The song has a bouncy piano riff while the title brings to mind a very specific visual. As a guy, something about seeing a woman’s lipstick marks on a cigarette is alluring and sensual. Very Freudian.

“Heart on My Sleeve”, the second single, was written by Scottish musicians Gallagher and Lyle and appeared on their 1976 album Breakaway. This cover has a slower, almost country-like tempo to it.

“Where Did Our Love Go” was a 1964 number 1 hit for the Supremes. Starr’s cover re-imagines it for the disco era by adding synthesizer. I half wonder if this version might have been an inspiration for Soft Cell’s cover a few years later (I can see the latter as a natural evolution of this one).

Side two begins with “Hard Times”, a cover of a tune by English musician Peter Skellern that appeared on the 1975 album of the same name. This one has a bit more of a rock edge to it thanks to the guitars and Starr’s drums.

“Tonight” was the third and final single, released only in the UK. The slower tempo and the synth strings bring to mind a romantic, candlelit evening between two people falling in love.

“Monkey See - Monkey Do” is a cover of a song written by jazz musician Michael Franks which appeared on his 1975 album The Art of Tea. The song feels like it could work as a big show-stopping stage number, but this version does not have enough oomph to pull that off.

“Old Time Relovin’”, the B-side to the first single, is the other Starr/Poncia composition on the album. The only part of this snoozer that perks my interest is the organ and piano that saunter along in the background.

Starr recorded a song for a UK children‘s album entitled Scouse the Mouse in 1977. “A Man Like Me” is that same song, with a substitution of the word “man” for the word “mouse” in that original. It has a very lullaby type quality to it.

I grew up on the Beatles so Ringo Starr was certainly no stranger to me. That said, I think you really have to be a hardcore fan to really love Bad Boy. While the music is mostly pleasant, it is a lot of just Starr taking a swing at some older songs that he enjoyed. If it had not been re-released in 1991 on CD, this one likely would have fallen into the halls of music obscurity.
Posted by Martin Maenza at 4:30 AM