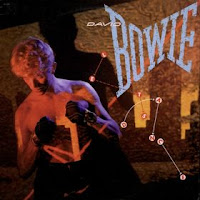 After a few years break from recording (Scary Monsters (and Super Creeps) was released in the fall of 1980 - click here for that review), David Bowie returned to the studio to work on his fifteenth album. Today (April 14th) marks the thirtieth anniversary of the release of 1983‘s Let’s Dance.


The album, co-produced by Nile Rodgers, was a multi-Platinum smash hit across the globe. It charted at number 17 in Switzerland, number 4 on the US Billboard Hot 200, number 2 in Austria and Germany, and number 1 Australia, New Zealand, Norway, Sweden and the UK. Rolling Stone magazine ranked Let’s Dance at number 83 on their list of the Top 100 Albums of the 80’s.

Rodgers also played guitar on the record along with his long-time associate bassist Bernard Edwards. Stevie Ray Vaughan lent his guitar talents to the record as well.

Side one begins with “Modern Love”. As the third single released, it peaked at number 27 in Germany, number 17 in Switzerland, number 14 on the US Billboard Hot 100, number 10 in the Netherlands, number 6 in Australia and on the US Billboard Mainstream Rock chart, number 3 in Ireland, and number 2 in Canada and the UK. It opens with a catchy guitar hook followed by pounding drums, the latter which carries throughout the entire tune. It also has one of those classic 80’s saxophone sounds too. One of the things I love about the lyrics is how one section of lines leads to another with the ending of the previous section opening the next. It instantly makes me want to get up and dance every time I hear it; it was such a big part of our high school dances senior year and at parties during my first year or so of college.

The second single “China Girl” came out a month after the album was released. The song was co-written by Bowie and Iggy Pop; it first appeared on the latter’s 1977 album The Idiot on which Bowie also performed. Bowie’s version charted at number 51 on the US Billboard Dance chart, number 15 in Australia, number 10 on the US Billboard Hot 100, number 7 in Norway, number 6 in Germany, number 5 in the Netherlands and Sweden, number 2 in Austria, Canada and the UK, and number 1 in Switzerland. The opening synth sets the exotic, Asian mood perfectly. Bowie’s vocals here have a sultry, seductive growl to them that quickly crosses over to the sexual stalker arena. This was another big dance favorite back in the day. It also reminds me of that scene in The Wedding Singer when Drew Barrymore’s and Christine Taylor’s characters are talking about Bowie coming to town and they sing a few lines from the chorus.

“Let’s Dance”, the first single, preceded the album by a month and was a runaway hit. It charted at number 14 on the US Billboard R&B chart, number 2 in Australia, Austria and Germany, and number 1 in Canada, Ireland, the Netherlands, New Zealand, Norway, Sweden, Switzerland, the UK and on both the US Billboard Hot 100 and the Billboard Dance charts. The album version is a full-blown, seven and a half minute celebration with a number of extended solos by the band. Taken with the first two tracks, this one rounds out a powerhouse of 80’s party music; I think it sets this album up for a perfect opening side.

“Without You”, the fourth and final single was released in Holland, Japan, Spain and the US; it charted at number 73 on the US Billboard Hot 100. This one has a bit of a Roxy Music feel to it for me. I certainly like the melodies and, compared the previous three track, the more laid back sound to the music. It works as a great cool down after the workout the opening trio provides.

Side two opens with the slight Caribbean swing, percussion-wise, of “Ricochet”. Bowie mentioned, in an interview with Musician magazine, that he felt that the syncopation was off in the final mix. The lyrics are topical in nature, making some commentary on situations in the UK around that time period.

The B-side to the fourth single was “Criminal World”, Bowie’s cover of a song first recorded by the band Metro (Peter Godwin, Duncan Browne and Sean Lyons) for their 1977 self-titled debut album.

“Cat People (Putting Out Fire)”, a re-recording of a song Bowie did for the soundtrack of the 1982 film Cat People, was the B-side to the first single. The music was written by disco great Giorgio Moroder while Bowie penned the lyrics. The original single version from the year prior went to number 67 on the US Billboard Hot 100, number 26 in the UK, number 17 in Ireland, number 8 in Switzerland, and number 1 in Norway and Sweden. This version has a more rock sound to it, thanks to Vaughan’s searing guitar.

The final track “Shake It” was also the B-side to the second single. I remember liking this one quite a bit back in day and still enjoy it today too. It has a very similar vibe to “Let’s Dance”, and I would put it on the same scale as the three big hit singles.

Back in 1983 I owned the 45s for the first three tracks (both for $1 apiece new), thus I never picked up a copy of the whole Let’s Dance album on vinyl. I felt I already had most of the album already. However, when it came time to get into the digital mode, this is one I felt I definitely needed to pick up. For me, it is an amazing David Bowie album. Yes, it was his most commercial and perhaps bent more to the popular new-wave, dance trends of the time, but I am perfectly okay with that. Those are two areas of music which I loved back in the day and still do today.
Posted by Martin Maenza at 4:30 AM

Thanks for another great post. Since CHIC was of my favorite bands, it was nice to see the boys reunite on the track "Ricochet" on this album. The rhythm section of Bernard Edwards (bass) and Tony Thompson (drums) went on to play together in the Eighties supergroup Power Station as well. Sadly, Edwards passed in 1996 while on tour with CHIC and we lost Thompson in 2003. And don't even get me started on CHIC's Rock And Roll Hall Of Fame snubs...