Meat Loaf - Midnight at the Lost and Found 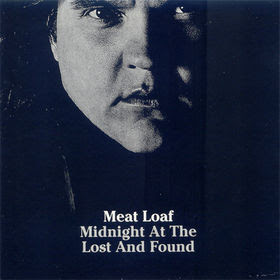 This month marks the thirtieth anniversary of the release of Midnight at the Lost and Found, the third studio album from rock singer Meat Loaf. It was also his final one for the Epic Records label.

Although the record failed to make much chart noise here in the US, it did chart around the world. It reached number 84 in Australia, number 26 in Germany, number 21 in Sweden, and number 7 in both Norway and the UK.


Unlike his first two albums, this one does not feature any songs written by Jim Steinman. At the time, Meat Loaf was in a dispute with Steinman but was under pressure from the label to put out a new album. As such, he worked with other songwriters as well as co-wrote a few of the tracks himself.

Side one opens on the “Razor’s Edge”. As the third single, it charted at number 93 in the UK upon initial release and number 41 upon re-release a few months later. It opens with a slow piano, played by Mark Doyle that builds.

The title track follows and was released as the first single. “Midnight at the Lost and Found” charted at number 21 in Ireland and number 17 in the UK. Rick Derringer lends his guitar on this track along with many of the tracks that follow. Max Weinberg’s drums set up a tribal rhythm that gives this one a high energy. While Meat Loaf sounds restrained on the opening track, here he lets loose the fury of his powerful voice.

“Wolf at Your Door”, a song about a predatory boyfriend, has a bit of a country-rock swing to it, reminiscent of early John Cougar Mellencamp.

“Keep Driving” was the B-side to the third single. This one has that dramatic sound that Meat Loaf is known for from his earlier albums, from the piano accompaniment to the gospel-like backing singers to his soaring vocals.

“The Promised Land” is a cover of a tune written by Chuck Berry. Paul Jacobs' rollicking piano helps set the pace on this spiritual rocker, while Meat Loaf testifies before the choir and congregation. I would have loved for this one to go on longer than the just-under three minutes length; I also think it would have been a great number to be performed live in concert.

Side two starts with “You Never Can Be Too Sure About the Girl”. This one really holds back on the verses but tries to make ground on the chorus; for me, it fails in the endeavor until the very end. Ah well, they cannot all be perfect gems.

“Priscilla” almost takes on a bit of an exotic island vibe to it. This is the one track where Derringer switched over to the bass.

The duet ballad “Don’t You Look at Me Like That” features Dale Krantz Rossington. On guitar is her husband Gary, who was a founding member of Lynyrd Skynyrd.

The second single “If You Really Want To” went to number 59 in the UK. It is the only track on the album to utilize synthesizer rather than traditional piano.

“Fallen Angel”, a heartbreaking mid-tempo tune, was the B-side to the first single as well as the album‘s closer. Meat Loaf provides his own backing vocals on this one, creating a nice vocal effect.

I downloaded a majority of the tracks from Midnight at the Lost and Found during the summer of 2009, when I was filling in my back catalog of Meat Loaf albums. I have always been a fan of his music and there were definitely some solid deep tracks here that I enjoy quite a bit as well.

For additional album reviews featuring Meat Loaf, please use the below links: