Roman Holliday - Cookin' On the Roof 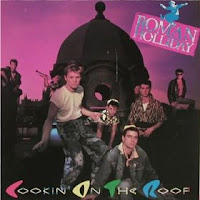 This month marks the thirtieth anniversary of the release of Cookin'On the Roof, the first full length album by the British band Roman Holliday. It went to number 116 on the US Billboard Hot 200 and number 31 on the UK charts.


Side one begins with "Don't Try to Stop It". This second single by the group went to number 14 in the UK and number 68 on the US Billboard Hot 100. You can really pick out Durno’s thumping bass and York's plunking piano on this one. The vocal harmonies by Rob Lambert and Brian Bonhomme are very smooth too.

"Motor Mania", the third single from the group; it peaked at number 40 in the UK. The multiple part vocal harmony on the opening, I think, is pretty cool. This one harkens back to all those odes to cars from the 60’s, but with a 40’s big band sound to it. I like the finger-snapping and the stop-go pauses too. It is also a five-star track in my book.

"I.O.U" is a song about a guy who is constantly running short on cash. But, as with their other songs, Roman Holliday presents it in an up-tempo way so you don’t feel so bad for the guy. I like how the horns punctuate the vocals throughout the song.

“Jive Dive” has a bit of a jazzy feel to it and makes me think fondly of the Manhattan Transfer (“Java Jive”). John Eacott on trumpet and Lambert on saxophone are showcased in this one.

“Midnight Bus” talks about the perils of drinking too much and having to ride the bus home (rather than drive drunk). Of course, when you combine drinking and the word “bus”, something else comes to mind as well. LOL

Side closes with the title track “Cookin’ on the Roof”; it is also the longest one on the record. Adrian York really works those 88-keys on this song.

Side two starts with “Stand By”, which also had a popular video that aired on the early days of MTV. It was the first single released by the group; it reached number 61 in the UK, number 54 on the US Billboard Hot 100, and number 1 on the Canadian Adult Contemporary charts. The opening is bouncy and gets my foot moving within seconds, thanks to the aforementioned swing elements. I was an instant fan after hearing this track, which gets a five-star rating in my music library.

“No Ball Games” is next. This one swings with a thumping bass line and blazing hot horns.

“Fur N’ High Heels” is a song about dating a high class gal.

“Serious Situation” slows things down a little with a piano ballad opening and then brings in the rest of the band.

The final track on the album is “One More Jilt”.

Cookin’ On the Roof did not show up in my local record store in 1983. Since I did have the band's debut EP which contained a number of this album's tracks, I did not actually seek it out either. It would take another twenty seven years before I would come across the full release via digital downloads, but it was well worth the wait. For anyone who likes the combo of rock and swing, Roman Holliday is a band you might want to seek out; they had that genre-mix down perfectly. The songs might be a little hard to come by, but they’re worth the hunt.
Posted by Martin Maenza at 4:07 AM