Bob Seger and the Silver Bullet Band - Stranger In Town 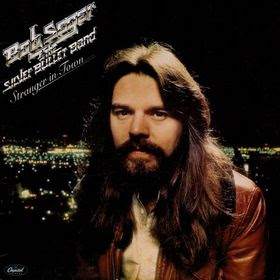 This month marks the thirty-fifth anniversary of the release of Stranger In Town, the tenth studio album from Bob Seger and his second with the Silver Bullet Band. It also features backing by the Muscle Shoals Rhythm Section. This multi-Platinum seller from 1978 reached number 45 in Sweden, number 31 in the UK, number 28 in Germany, number 14 in France, and number 4 on the US Billboard Hot 200.


Side one opens with “Hollywood Nights”, a big and boisterous tale of a young man taken advantage of by a wily, experienced California woman. As the second single, it climbed to number 42 in the UK, number 38 in New Zealand, and number 12 in Canada and on the US Billboard Hot 100.

The first single “Still the Same” went to number 30 in Germany, number 27 on the US Billboard Adult Contemporary chart, number 23 in Australia, number 22 in Belgium, number 20 in New Zealand, number 18 in Austria, number 13 in the Netherlands, and number 4 in Canada and on the US Billboard Hot 100. I have always liked the backing vocal harmonies on this melancholy song about a gambler who sticks to his system and never takes a risk.

“Old Time Rock & Roll”, the final single, went to number 38 in New Zealand, number 31 in Canada, number 28 on the US Billboard Hot 100 and number 3 in Australia in 1979. This song waxes nostalgia about the music of years gone by and the powerful roots of rock. Of course, every time I hear those opening piano chords I immediately think of a very young Tom Cruise sliding across the front foyer in his underwear and stocking feet from the 1983 film Risky Business.

“Till It Shines” too is a song about reflection and contemplation, and it features some great guitar riffs through out. Glenn Rey has a guitar solo here.

“Feels Like a Number”, the B-side to the first single, closes out a perfect album side. The lyrics touch upon the frustration of living life as just a face in the crowd, not standing out or making a major impression. This is one that sounds great with the volume turned up and the windows down as you drive down the road. My favorite part is the various solos - guitar and piano.

Side two begins with “Ain’t Got No Money”, the B-side to the third single. It is a down-and-dirty cover of a tune by the Scottish group the Frankie Miller Band from their 1975 album The Rock. It has a great swagger and attitude. Don Felder adds his guitar talents to this track.

The beautiful piano-based ballad “We’ve Got Tonite”, the third single, charted at number 31 in Australia, number 29 on the US Billboard Adult Contemporary chart, number 24 in Ireland, number 22 in the UK, number 13 on the US Billboard Hot 100, number 12 in New Zealand, and number 9 in Canada. In 1983, Kenny Rogers and Sheena Easton released a duet version that topped the charts as well. Being all about two lonely people finding comfort in one another’s arms, it made for a quintessential slow-dance number.

After a quiet respite, “Brave Strangers” comes crashing in with a big, bold sound. If the previous track was a gentle romantic overture, this one is a culmination in carnal delight. I like how the band takes things down a notch midway through, complete with a sensual saxophone in the background.

“The Famous Final Scene” closes the album on a theatrical note as a man faces a final curtain call in life.

I heard Stranger In Town numerous times during my teen years through high school and beyond. My older brother owned a copy of this Bob Seger album on vinyl, and many of the tracks were in heavy rotation on the album oriented rock station we listened to from Buffalo. I can remember these songs being popular too in the bars and at college parties a number of years later. The whole album definitely takes me back to that time with many songs that have become rock classics.
Posted by Martin Maenza at 4:30 AM

Using a small "loan" from my Mom, this was the very first album I bought for my Dad. If I remember correctly, I bought it on his birthday (which is May 6th - Happy Birthday Dad!) and the guy behind the counter at Musicland in the mall said it had just came out and I'd "dig it". I told him I was buying it for my Dad and he said I must be "a cool kid."

Don't think any of the singles were getting airplay yet but he was (and is) a big fan of Seger's previous album Night Moves so it was a safe bet he'd like this one. I also bought him 1980's Against The Wind - with my own money this time - a couple of years later for his birthday.

Didn't have an older sibling like you to introduce me to music so my Dad gets all the credit. And the blame. Lucky for me, he has great and varied musical tastes.

Great story - thank you for sharing that!

Fun Fact: Talking to my Dad yesterday, I mentioned I had just written about him and Bob Seger in a comment on your blog. He said "You know Seger and I share a birthday?" I did not but I looked it up and sure enough, Bob Seger is exactly one year older than HERC SR.