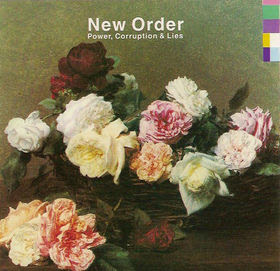 Today (May 2nd) marks the thirtieth anniversary of the release of Power, Corruption & Lies, the second studio album from the English rock band New Order. It charted at number 66 in Canada, number 38 in Australia, number 18 in Germany, number 16 in Sweden, number 14 in the Netherlands, number 4 in the UK and number 3 in New Zealand.


Side one opens with “Age of Consent”, which I first heard on the local college radio station. The opening guitar riffs by Bernard Sumner and Peter Hook, plus the added percussion from Stephen Morris instantly pull me into this stimulating tune. Throw in Gillian Gilbert’s sweeping synths and it makes for a great number.

“We All Stand” has a slow and suspenseful pacing to it that has the listener on the edge of his seat. It some ways it feels, to me, that this one could have been influenced by the music of the Doors. Sumner’s vocals have that Jim Morrison quality going on. Morris’ drums here have a hint of Phil Collins to them also. It is a very moody piece.

The dance beats return with “The Village”, a perky, optimistic love song.

The seven and a half minute long “5 8 6” closes out the side. It starts out with some interesting musical effects before evolving into a full on synth-driven dance groove a few minutes in. I like how it winds down near the end, like an engine running out of steam.

Side two starts with the lush synth sounds of “Your Silent Face”. It reminds me a bit of the work of Kraftwerk with the many electronic layers.

“Ultraviolence” has a real primal feel to it, both musically and vocally.

“Ecstasy” incorporates some synthesized vocals, adding an impersonal element to a more arousing theme. That makes for an interesting contrast indeed.

Cassette versions of the album added on the non-album single “Blue Monday” (which charted at number 13 in Australia, number 10 in Switzerland, number 9 in the UK, number 5 on the US Billboard Dance chart, number 4 in Ireland, and number 2 in Germany and New Zealand) and “The Beach” (that single’s instrumental B-side) to round things out further.

Outside of the opening track, most of Power, Corruption & Lies was a bit unknown to me. Or, at the very least, if I heard some of these New Order tracks back in the day I certainly did not know them by name. I definitely got into this record and could see elements of their later 80’s work already well formed here. This is another that is going on to my download-soon list as it fits right in with the synth-pop genre of music I was very much into during my latter high school and early college years from 1982 to 1985.

For more of my reviews featuring New Order, check out the links below:

- for their third studio album Low-Life from 1985, click here

- for the soundtrack to 1986's Pretty In Pink, click here

- for the soundtrack to 1988's Bright Lights, Big City, click here
Posted by Martin Maenza at 4:30 AM

Based on your reviews, it sounds like you've enjoyed hearing your first two New Order albums. I'm a big, BIG fan of New Order's music. Two of my earliest blog posts - from way, way back in 2012! - cover the group's career:

If you've never heard the Australian trio Cut Copy, do your ears a solid and head over to Spotify and check them out. Start with my favorite album of theirs: In Ghost Colors. To me, they sound very New Order-ish. I look forward to hearing your opinion on their music as well as other New Order albums.

Thanks for the suggestion. I will have to check Cut Copy out n