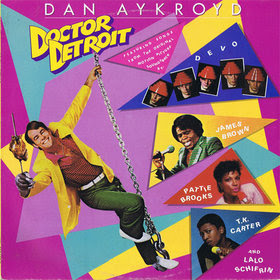 Tomorrow (May 6th) marks the thirtieth anniversary of the release of Doctor Detroit, an American comedy film. It tells the tale of a professor named Clifford Skridlow (Dan Aykroyd) from a college with financial problems. He meets four prostitutes (played by Fran Drescher, Donna Dixon, Lydia Lei and Lynn Whitfield) that change his life. Unfortunately, their pimp Smooth Walker (Howard Hesseman) has problems of his own with a Chicago mob boss known as "Mom" (Kate Murtagh) and decides to use Skridlow as his patsy. Skridlow comes up with a fake identity named Doctor Detroit.


You say you don't remember this 1983 film? Well, most people probably don't either. The studio had a budget of $8 million to make it, but it only managed to pull in $10.8 million in domestic box office sales. That, kids, is what is referred to as a Hollywood flop.

There was, however, an album that was released along with the film that included some decent musical talent. So, today we'll take a look at the nine tracks that make up the Doctor Detroit soundtrack.

Side one opens with Devo and the "Theme From Doctor Detroit". As expected it is a synthesizer explosion of 80’s new-wave goodness.

R&B singer Pattie Brooks and Aykroyd duet on "Hold Him", a rocker about how to show your man how much he means to you. The comedic actor also plays harmonica on the track.

James Brown, who also has a small cameo in the film, is next with his funk-dance tune "King of Soul".

T.K. Carter (who played "Diavolo Washington" in the film and would later play a teacher on the TV show Punky Brewster in 1985) and Aykroyd perform together on "Yo Skridlow".

Brooks and Aykroyd team up again for "Working Girls", an ode to the quartet of ladies that come to befriend the befuddled professor.

Side two begins with James Brown's "Get Up Offa That Thing / Doctor Detroit", a modified version of his 1976 funky classic. This version pays tribute to the film’s titular character as part of a party dance scene near the end of the film.

Devo returns with the quirky "Luv-Luv". It bounces along with aimless abandon and a dependable dance beat.

Brooks goes solo with "You Are the One", a synth supported dance track.

Brooks closes with "Get It On and Have a Party", an up-tempo groove to unwind and get down to. At over six minutes in length, it is the record’s longest track as well. Released as a single, it got a good bit of play in the clubs at the time.

I certainly never saw Doctor Detroit in the theatres; I question whether it even came to our small town theatres. I think I might have caught it on cable a year or so later though as it sounds like the type of movies they would run at late night hours to fill up time slots. I caught a clip on YouTube while doing this review - I don’t think the film holds up very well. Of the tracks from the soundtrack that I was able to locate (the ones by Devo, Pattie Brooks and James Brown), I certainly found the music to be the best part.