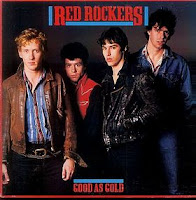 This week (April 8th) marks the thirtieth anniversary of the release of Good As Gold, the second full-length album from the New Orleans natives Red Rockers. The line-up of the group changed slightly prior to this album as Jim Reilly came on board as the new drummer. The rest of the quartet was founders John Thomas Griffith (rhythm guitar and vocals), James Singletary (lead guitar) and Darren Hill (bass).


Side one opens with their biggest single "China", which peaked at number 53 on the US Billboard Hot 100. It is likely the song they are most known for as the video got quite a bit of airplay during the early days of MTV. It opens with a great pop guitar hook and includes solid vocal harmonies.

"Good As Gold" opens with another cool guitar riff, this one that rings out vibrantly. If this one sparks some familiar recollection, it could be because the track was released as the follow-up single. For me, this one has a great southern rock vibe to it which speaks to the band's roots.

The tempo kicks into overdrive on "Dreams Fade Away", a song about life spiraling out of control. The vertigo-like music really sets up that whole feeling quite well.

"Change the World Around" is up next. While still a solid song, it is my least favorite of the first side.

"Answers to the Question" is a soul-searching song with interesting tempo change-ups through out. They keep things from getting to dull and predictable, which is always a good thing for the listener.

Side two starts with "'Til It All Falls Down", the B-side to the second single. The lyrics imply a job in a factory, working on an assembly line of sorts. I like the structure of this one musically and feel it definitely could have been the lead side of a single in its own right.

"Running Away From You" keeps the energy level up with this tune about escaping a bad situation.

"Fanfare For Metropolis" is an ambitious ode to a big city that can be both exciting and intimidating at the same time.

"(Come On Into) My House" follows. Like some of the earlier songs, the band here again uses tempo change-ups between the verse and the chorus to add some spontaneity to the mix. Here it does not work as well for me.

The final track "Home Is Where the War Is" has an interesting title for a song that appears to be about a veteran who has difficulty adjusting to civilian life again.

I first got to know Red Rockers from hearing "China" on the local college radio station during my final year of high school. The song remained part of my musical landscape when I picked up a Rhino Records compilation series of 80's new-wave music during the mid-90's. It was not until a few years ago though that I picked up the rest of Good As Gold as part of downloads to my digital music library. It is definitely one of those oft-forgotten gems from the heyday of the new-wave movement - solid three-guitar rocking music.
Posted by Martin Maenza at 4:30 AM

Great post. Saw them open for U2 in March 1985 during the Unforgettable Fire tour. The band's songs and energy were a good warm-up for U2 and the live performance of "China" was particularlly stirring, with the crowd singing along. Of course, the headliners matched that emotion with their own elctrifying "Bad" and "40". The concert was also memorable because my girlfriend had broken up with me a week before the show so I took my little sis.