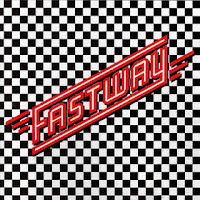 This month marks the thirtieth anniversary of the self-titled debut album from the UK heavy metal band Fastway. The band was formed by guitarist “Fast” Eddie Clarke (formerly of Motörhead) and bassist Pete Way (formerly of UFO). They added drummer Jerry Shirley (formerly of Humble Pie) and singer Dave King. However, before they began recording 1983’s Fastway, Way abandoned the project; the group brought in session bassist Mick Feat to do the record.


Side one begins with “Easy Livin’” which was released as part of a three track promotional single. This tune tells of a girl who parties with no cares in the world.

“Feel Me, Touch Me (Do Anything You Want)” is such a great title that would appeal to the sexually charged teen to young adult listening market.

“All I Need Is Your Love” does not go very far lyrically or musically; it settles into a comfortable rocking groove and stays there for two and half minutes.

Things appear to settle down with “Another Day”, complete with an acoustic guitar opening, but don’t get fooled. The band slides right into a thumping, heavy pattern soon enough.

“Heft!” starts out weighted down with a drudging beat; you can really feel the load. It makes for a great effect. But there is a glimmer of relief when it comes to the second half of the track.

Side two opens with “We Become One”, a track released as the second single in June of 1983.

“Give It All You Got” features a shuffling rhythm through out.

Also part of the three track promo single was “Say What You Will”. My son actually thought on this one King sounded a bit like AC/DC but I was thinking more along the lines of Mötley Crüe.

“You Got Me Runnin’” is about a guy who is totally at the beck-and-call of his girlfriend.

“Give It Some Action” closed out the original album, sticking pretty close to the same formula that was used throughout the first two sides - hard, fast rock.

The first vinyl pressings included a separate promotional single with the song “Far Far From Home”. It was also part of the three track promo single and later was included on the first CD release. This one features a slinky strut that helps it stand out from the rest of the record. I can definitely see why the band wanted to include it right out of the gate, for me it is one of the top tracks here.

A couple first impressions from me on this group which I am certain I cannot recall ever hearing prior to doing this review:

First off, how 80’s is that album cover? It so reminds me of Vans sneakers with the black-and-white checkered pattern. I have a yellow-black patterned pair that I bought in 2008 specifically for my 25th high school reunion.

More importantly, Fastway totally rocks. King sounds like he came from the “Robert Plant School of Vocals“. Clark and Feat’s guitars roar with great power. Shirley drives the drumbeats non-stop. Any Zeppelin fan will feel like this record is a long lost friend. For me, it just how I like my metal - somewhat melodic while not full of screeching or wailing.
Posted by Martin Maenza at 4:30 AM

This album is an old favorite of mine. My brother had it on vinyl with Far Far From Home included on a bonus 7". I had it on cassette, where said song was a bonus track. Say What You Will was huge on the radio in Detroit at the time. Fastway opened for AC/DC here in 1983.

Kris, thanks for reading and the comments. They are always appreciated.