Meat Loaf - Bat Out of Hell 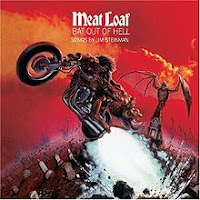 Welcome back for another edition of " Seventies Saturday".

Add to that list Meat Loaf and Jim Steinman. This combination was a marriage made in musical heaven (or would that be Hell?). The former delivers theatric rock performances with an amazing voice and the ability to master complex lyrics precisely. The later is a musical savant with an equal flare for dramatic and a vision of grand compositions. Together, they created the amazing debut album Bat Out of Hell. Released in the Fall of 1977, the album is ranked number 343 on Rolling Stone's Top 500 Albums of All-Time and also is on the list of "1001 Albums You Must Hear Before You Die".


Let's start out with that iconic album cover. Richard Corben brought Steinman's concept to life - the motorcyclist bursting out of the graveyard with a giant demonic bat watching on from the distance. My older brother had this one on vinyl, and I loved looking at that artwork (me being just getting into less kiddie comic books at the time - so this was a cool part of that transition - it was like something out of some horror comic book). It is the perfect visual to go with the music therein.

This is a favorite album of mine (easily falls into my top 25 for the decade if not of all-time). It was one of the first CDs I got on when I got my first CD player in 1990. Before that I had a cassette copy from my brother's disk. I've easily listened to this album through and through many dozens of times over. For me, it never gets old. If I'm playing it in the car, I'm singing along to every single track. Bat Out of Hell has made me a lifelong fan of Meat Loaf and an avid follower of Steinman as a writer/producer.

Let's talk about the music.

Side one explodes out of the gate with the powerful opening of the title track "Bat Out of Hell". You know from those first moments that you are getting into something grand and epic, and the song delivers just that. Meat Loaf doesn't even start to sing until almost the two minute mark of this nearly ten minute masterpiece, but you don't care. You're so into it by then. The song is about a motorcyclist (right off the cover) who never sees the sudden curve before it's way too late (symbolicly in love and actually on the road). And just when you think it is coming to the conclusion, it roars on! It is a classic title track to be sure and my second favorite on the album.

"You Took the Words Right Out of My Mouth" opens with a whispered exchange between a man (Steinman) and a woman (Marcia McClain) which makes me think of a tempting fairy tale. It is a song about that one kiss - the one that takes the words right out of your mouth. Yeah, one that is that good! It was the one that we teens of the late 70's were hoping to receive from that certain special someone.

"Heaven Can Wait" starts with the simple piano as accompanyment and builds. Meat Loaf shows us his soft, ballad side while still delivering the passion. The side ends with "All Revved up with No Place to Go", another steady rocking number with a wonderful saxophone opening. It has a classic, retro rock and roll feel to it. And that high paced ending - outstanding.

Side two starts off with "Two Out of Three Ain't Bad", a title which has pretty much entered into the universal phrase book of generations since. Meat Loaf's performance is tender and heart-felt - you really feel you're right there, seeing the snow piling up outside. For me, one particular memory I have of this song is from Middle School. It was the late Winter of 8th grade year of my schooling (1979), and the students were doing a musical/variety show. One of the students, a good friend of mine named Neldy, performed "Two Out of Three Ain't Bad" and did a phenomenal job on the song. Clearly she was a fan, and she made me a fan too. That was a fun show to watch (I didn't perform) overall with friends doing songs (some lip-synced, some sung by talented kids) from Grease (Darcy, Danny and the gang doing "Summer Nights"), Billy Joel (Jim singing "My Life" which he had to censor because the school felt a pre-teen singing about people sleeping together might be too risque), ELO (a wild performance of "Jungle") and more. A great night!

"Paradise by the Dashboard Light", a duet that features Ellen Foley, is the center piece of the side. This epic song (at eight and a half minutes in length) is the story of teenaged desire in three acts: courtship, consummation, and then compunction. And how can you not love the inclusion of New York Yankees commentator Phil Rizzuto presenting that baseball analogy as the boy rounds the bases and slides in for that "homerun". We would often hear it out at one of the hometown bars years later (at the Caboose) and folks would "act out" the song, including a mock ball game. If I were to do karoake with another person, this would be a fun song to pick. Definitely my favorite track from the record.

The album ends with the equally lengthed "For Crying Out Loud", another passionate vocal performance by Meat Loaf with piano accompanyment. It starts out slow and builds to swelling, only to change the pace again once more to end on that sweet note. It is the perfect ending to a perfect album.

This is one of those albums I love to listen to in a dark room with the headphones on. The blaring music is enough to cut through the black void, replacing one sensory input with another. It takes me back to those teenaged years where every brush of attraction and romance was blown up to theatrical proportions. This is the legacy of Bat Out of Hell, and it is a good one.
Posted by Martin Maenza at 10:48 AM

Thx for the good read! Also like your association to certain tracks. However, we differ on our favourites. "Paradise" would be my least favourite (I actually avoid playing the track now) while "Two Out of Three" and "Heaven Can Wait" are my top 2 favs.

Pete, thanks for reading and the comments.