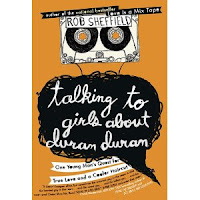 Earlier in the month I posted my review of Rob Sheffield's Love Is A Mix Tape which I enjoyed quite a bit. As soon as I finished reading that, I ordered his 2010 book Talking To Girls About Duran Duran: One Man's Quest For True Love and a Cooler Haircut. Like his first book, this second one is also autobiographical. It is actually a "prequel" of sorts, as he talks about mostly events from the period of 1980 through 1989 - the decade where he went from 13 to 23 - and how music of those years serve as audio reminders of events that occured there-in.

What I enjoyed about his first book was that Rob uses music to set the tone/framework for his chapters. He does the same thing here with each of the twenty-five chapters titled by a song. I liked that. I also like the song choices as many reflect my own musical tastes. He and I have a few other things in common: we're close to the same age (I'm two years older than he), we both were raised Catholic (he being Irish, me being Italian), we both worked a summer in the ice cream biz (he driving a truck, me in the freezers) and we both started the decade of the 80's as young men seeking to understand the female mind and ending the decade with a person we'd marry. I'm a bit jealous of him though - he actually went on to become a writer/journalist; that was always a dream of mine back then but instead I went to college and got a practical degree in computer science. But I digress...

Back to the book, I like how it started out. Not having sisters of my own (the closest was my aunt's daughters), the insights into how Rob and his relationship with his sisters was interested. Irish females sound a lot like Catholic females. And I like how it ended, with the beginnings of Rob and Renee's relationship that was chronicled in detail in Love Is A Mix Tape. The middle of the book though was like a roller-coaster for me - some high points where I was enjoying the ride and some low points where I was lulled by slow, flat sections of track. Focusing on the positives, I loved the chapters that included clubbing in Europe, Haysi Fantayzee and one-hit wonders, Ray Parker Jr., stalking Debbie Gibson, cassingles, working on the highway crew and as an ice-cream man, karoake (even though those events fell outside the decade period as they were more current stuff) and Duran Duran. It think I liked these chapters more because the interweaving of the music and the narrative was much more seamless (it didn't seem forced or an after-thought like a few of the other chapters).

For folks like me who went from awkward teen to more assured adult in the 80's, this is a good read. I would recommend it to my peer group from high school and college easily. Others older or younger might not "get it" as much.
Posted by Martin Maenza at 4:48 PM

I just finished reading this book. I had alerted a friend of its existence some time ago, and her being a big DD fan like myself, bought it and gave it to me this weekend. Great reading.It's certainly not all about Duran Duran, and even someone who doesn't know every song Rob discusses can still relate to how, well, a song can relate to your life. A moment in time. Much like you, I enjoyed certain sections. The "cassingle" chapter is one of them. Good stuff. I knew 85% of the songs he brings up, the others I looked up while reading the chapters. Great review. I'm going to search out his "mixtape" book now.

Do seek out "Love Is a Mixtape". I read that one first of the two, enjoyed them both.

The title of the book is Turn Around Bright Eyes: The Rituals of Love & Karaoke and it's due out August 6.

Herc, funny you should mention Rob's new book. I got an email from Amazon.com just before I saw your comment telling me about the book. Weird vibe from the Internet. I definitely plan to pick it up - most likely in Kindle edition.