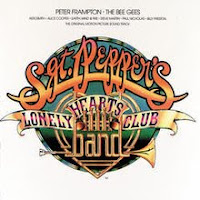 Welcome to another "Soundtrack Sunday" on this Oscar Night 2011, the night Hollywood honors the biggest films from the previous year. My choice for today's blog entry is from a film that is so far away from Oscar-worthy material, however it has some great music.

I'm speaking of the 1978 film Sgt. Pepper's Lonely Hearts Club Band, a musical that starred Peter Frampton, the Bee Gees, Frankie Howard, George Burns, Paul Nicholas, Sandy Farina, Dianne Steinberg, Steve Martin, Aerosmith, Alice Cooper, Earth Wind & Fire and Stargard. The story is told entirely in song, as Billy Shears (Frampton) and the Henderson brothers (the Bee Gees) leave Heartland to become a famous band - leaving the idealized town prey to corruption when magical instruments are stolen by evil forces. Yes, you read that right. It is kind of a wonky plot. It was actually an adaption of a 1974 off-Broadway production.


The film might be a clunker (though I liked it - saw it in the theatres on its original short run and own it today on DVD), but the soundtrack is pretty decent. Put out by Robert Stigwood Productions (RSO records), this double album is a full celebration of the Beatles' later work - since the entire movie is told by using twenty four songs from the later releases of the Fab Four. I had this one on vinyl back in the day and played it often.

I won't do a full breakdown of this soundtrack album, which was released on July 23rd of 1978 and debuted at number 5 on the US Billboard Hot 200 (eventually going Platinum in sales). You'd know the songs by the titles since they are pretty much classics reinterpretting. Instead, I'll just note a few of my favorites:

- Sandy Farina's take on "Here Comes the Sun" and "Strawberry Fields Forever" are sweet and refreshing coming from a female voice.

- Paul Nicholas takes lead on "Good Morning Good Morning" with help from Frampton and the Bee Gees. I like that version a lot.

- Robin Gibb gets the only solo of the brothers on "Oh! Darling", which went to number 15 on the US Billboard Hot 100. This sort of parallels when Robin did his own solo run from his brothers in the 1970.

- Aerosmith does the same with their version of "Come Together". It went to number 23 on the US Billboard Hot 100.

- My favorite song from the film is Paul Nicholas and Dianne Steinberg on "You Never Give Me Your Money". Second favorite is the Framptom/Bee Gees take on "Golden Slumbers/Carry That Weight".
Posted by Martin Maenza at 8:28 AM