The Beatles - Meet the Beatles 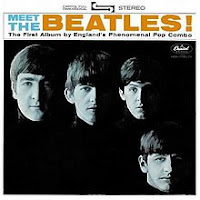 I was at my parents' house last weekend, thumbing through my older brother's vinyl collection, and ran across our old copy of Meet the Beatles. This was the 1964 US release (the second US album) by the Fab Four and took a lot from their UK release With the Beatles, right down to a slighly different version of front covers. Meet... ranked number 59 on Rolling Stone's "500 Greatest Albums of All Time" list while With... came in at 420. With... does appear on the "1001 Albums You Must Hear Before You Die" list though.


The copy that my brother still has was one of the first albums I can ever remember listening to as a child (I was born a year later and remember it fondly from the playroom of our old house in Buffalo - where we lived until I was four years old). I put that record through hell. It has a ton of scratches on it. The "Beatles" on the front cover was all struck out with black magic marker and the back side has the guys all colored in with orange crayon. Given all that you would think I didn't like the album, but you would be wrong. I loved it then and even now today.

The album starts off with a trio of songs not found on With...: "I Want to Hold Your Hand", "I Saw Her Standing There" and "This Boy". Side one finishes off with the first three from With...: "It Won't Be Long", "All I've Got to Do" and "All My Loving".

Side two contains all the remaining original tunes from With... plus one cover: "Don't Bother Me", "Little Child", "Till There Was You" (the cover), "Hold Me Tight", "I Wanna Be Your Man", and "Not a Second Time".

These early tunes are some of my favorites from the Beatles - most likely because they've been a part of my life since the time I discovered music. I don't know if this album belonged to my parents first (I don't think so since they've never been huge music listening people - not pop music) or if it was something they got for my brother and me - since the music was infectious and "child friendly" (compared to other 60's fare). Maybe some of these were early lullaby songs for me. I don't really know.

I like the fact that they are simple, stripped down songs. It is three guitars, a drumbeat and the sweet harmonies - all coming together in simple pop perfection. Perhaps that's what appealed to me so much as a child - the simple yet oh so effective tunes that the Beatles laid down. This album surely was a cornerstone upon which all my musical tastes were built, and I like to think it is a pretty solid building block.
Posted by Martin Maenza at 6:07 AM