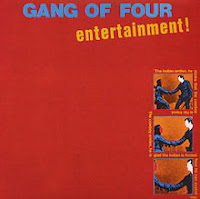 My first exposure to the Gang of Four was through their 1982 song "I Love A Man In a Uniform" from the album Songs Of the Free. I liked that song a lot. So, when I got my first CD player in 1990 I happened upon two earlier disks by the band in a bargain bin. I figured I might like them so I picked them up. One was their 1979 debut Entertainment!.

The album appears on Rolling Stones "Top 500 Albums of All-Time" list (at number 490) and "Top 100 Albums of the 80's" (at number 63). It also appears on the "1001 Albums You Must Hear Before You Die" list. Despite all these critical recommendations, Entertainment! isn't a huge favorite of mine.

The music is a mix of punk with funk, with a little reggae and dub thrown in for good measure. I think because it such a mish-mash of genres that none of them stick really well for me. The songs are just okay - something I don't mind playing in the background but not something that really commands my attention, making me stop what I'm doing and take notice.

Track four - "Damaged Goods" - is the first one that even stands out to me, in part because the first three - "Ether", "Natural's Not In It" and "Not Great Men" sound so much alike.

Then it isn't until track 7 - "I Found That Essence Rare" - do I find the next song that I like musically. The others in between are sort of forgetable.

When I finish listening to the album, none of the songs are imbedded into my brain. There are no lyrics or refrains that I find myself going over and over again. I wouldn't say this is because the songs are punk because I know of a number of punk songs that the lyrics stick with me long afterwards. This album, though, nothing. Perhaps the depth of these lyrics are lost on my pop-rock musical foundations. Ah well - that's the nature of music (it doesn't have to appeal to everyone equally).
Posted by Martin Maenza at 8:13 PM