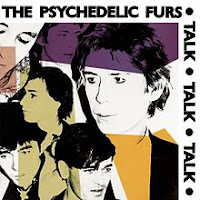 Talk Talk Talk from 1981 was the second studio album from the Psychedelic Furs. It reached number 30 on the UK album charts and number 89 on the US Billboard Album chart. The album appears on the "1001 Albums You Must Hear Before You Die" list.

The UK album/CD release has a different track listing order than the US version. I'll take a look at this album in its US format.


Side one starts off with the very familiar "Pretty In Pink", a favorite 80's song of mine. I am a huge fan of the John Hughes motion picture that gets its name from the song. This original version is slightly different than the soundtrack version but all the familiar aspects were there from the get-go. As the third single from the album, it reached number 43 in the UK. Five years later, with the film driving it, the single went to number 18 in the UK and number 41 on the US Billboard Hot 100.

"Mr. Jones" is next with another catchy rhythm to it. It was the first single release from the album, though it failed to make any dents in the charts on either side of the pond.

"No Tears" changes the rhythms up a bit yet carries those signature vocals from Richard Butler.

"Dumb Waiters" has a heavier, punk feel to it. I love the combination of guitars with saxophone on it. This second single went to number 59 in the UK and number 27 on the US Dance charts.

The side ends with "She's Mine", a romantic song with a melancholy feel to it.

Side two begins with "Into You Like A Train" and the band really captures that sound of a locomotive. I like it a lot.

"It Goes On" is next with a good driving beat, followed by "So Run Down".

The fourth track is "I Wanna Sleep With You" and back in that heavier vein of "Dumb Waiters".

The album ends with "All This And Nothing" and its long introduction.

As a fan of the band, there were five tracks from here that I am interested in adding to my music collection (I had four of the ten from a greatest hits collection prior to this listening).  I am passing on "I wanna Sleep With You".   Clearly the Furs established some sounds of the new decade that would influence other bands - thus earning them that spot on the "1001 list". Overall, I found it to be a pretty good album.
Posted by Martin Maenza at 10:54 AM

Got track listings and such from Wikipedia. Comments on tracks are my own opinions based on listening to them.