The Rolling Stones - Some Girls 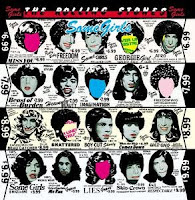 This week, I've picked the Rolling Stones and their 1978 album Some Girls to kick things off (which was released on June 9th). Now, this is not one I had on vinyl myself, but I heard it plenty thanks to my older brother who was a huge Rolling Stones fan. He played this one often on his turn-table in his room as well as having a cassette recording of the tracks to play in his car. I remember too how the inside sleeve slid into the outer album jacket, allowing you to align different images of Mick and the band members with wigs for funny combinations. That's not something you get when you have the CD version. As for the music, it was pretty popular stuff with most of the tracks being played on the album rock stations. The album also appears at spot number 269 on Rolling Stone's "Top 500 Albums of All Time" list.


"Miss You" kicks off side one with its familiar opening bass line and the "ooo-ooo-ooo" chorus. The song went all the way to number one on the US Billboard Hot 100 charts in August of that year, dethroning Andy Gibb's seven week reign of "Shadow Dancing". The song appears at number 496 on Rolling Stone's "Top 500 Songs of All Time" list.

Next up is "When the Whip Comes Down", a more rocking tune that is reminiscent of previous efforts by the band and showing all that the Stones had not gone disco.

"Just My Imagination (Running Away With Me)", a cover of the Temptations 1971 number one hit, follows with the boys giving their own spin to it - much like they did early in their career when they recorded covers of tunes.

The title track, "Some Girls", is next and I have to say it is one of my least favorite tracks on the album. I just never really got into it as much as the others.

The first side ends with "Lies", a fast-temp rocker that showcases the guitar work Richards, Wyman and Wood.

Side two changes things up a bit with the country-fied "Far Away Eyes". Mick seems to really be enjoying himself doing a southern accent on the vocals. It shows too that the band is adept at many styles.

"Respectable", which brings us back to that fast-rocking style, was released as a single in the UK but not here in the US.

The center track of the side is "Before They Make Me Run", another song that is on my least favorites of this album - again, not one that I heard too often. But with so many good tracks, a couple so-so ones are expected. Par for the course.

"Beast of Burden" is next - and it too appears on Rolling Stone's "Top 500 Songs" list (at number 435, besting "Miss You"). It reached the number 8 position on Billboard in September of that year. This song is one of my favorites on the album, and I really like the 1983 cover that Bette Midler did of it as well - with the video including guest Mick Jagger no less.

The album closes with "Shattered" which only reached number 31 on US Billboard Hot 100 at the end of the year. This one too is a classic, from the music to the vocals.

All in all, Some Girls is a solid album that showed that the Stones still had a lot of gas in the tank even after a decade and a half in the business. This album really started the second big period of popularity for them.
Posted by Martin Maenza at 8:19 PM