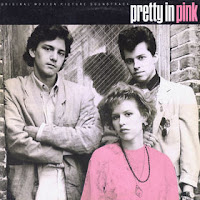 Welcome to Soundtrack Sunday, another feature I want to try here on my blog. Each weekend (for awhile at least) I'll pick an album that served as a soundtrack for a film, giving you my thoughts on the music that makes it up.


To kick things off, I want to start with the soundtrack from Pretty In Pink, the 1986 John Hughes film starring Molly Ringwald, Andrew McCarthy, Jon Cryer, and James Spader with Harry Dean Stanton and Annie Potts (plus a newcomer at the time - one Andrew Dice Clay). This is a film I enjoy a lot (it always puts me in a good mood for some reason) and the soundtrack perfectly fit the film to a tee. This is one I had on vinyl back in the day (it came out during my Junior year of college) and am very glad to have the MP3s to play today on my iPod and iPhone. It is pure 80's at its best, making it one of my favorite albums from that year. Let's look at what we have.

Side one kicks off with Orchestral Manoeuveres In the Dark and their hit single "If You Leave" (which went to number 48 in the UK, number 15 in Australia, number 5 in Canada and New Zealand, and number 4 on the US Billboard Hot 100. This is the signature sound that I associate with the band, and the song was used during the final scene of the film when Andie (Ringwald) and Blane (McCarthy) realize where their high school romance is going. It is my second favorite song on the album with its full-blown instrumentation, solid beat, and lyrics of relationship love, loss and hope.

Next up is "Left Of Center" by Suzanne Vega, with a little help from Joe Jackson. As a single, it found its spot at number 35 in Australia, number 32 in the UK and number 28 in Ireland. This was one of my first exposures to the Sacramento (California) born singer's vocal stylings, and the song fits so well with this kind of film.

Jesse Johnson brings his Minneapolis sound to the next track - "Get To Know Ya". It adds a little funky element to the whole album mix, a nice change of pace.

INXS adds their own voice to the party with "Do Wot You Do", a song that fits well with the rest of their catalog of hits from that time period. This trio of songs gives the album a nice 80's feel, covering various sounds of the time (with what we were hearing on the airwaves and seeing on MTV).

Side one ends with the title track by the Psychedelic Furs. "Pretty In Pink" actually first appeared on that band's 1981 release Talk Talk Talk. They re-recorded the song for the movie. As a re-released single it went to number 61 in Canada, number 41 on the US Billboard Hot 100 and number 18 in the UK.

Side two kicks off with a great dance number by New Order. "Shell-Shock" is by far my favorite track from the album (five stars on my iPod), and it could often be heard in dance clubs in the Spring and Summer of that year. I never get tired of hearing it. As a single, it went to number 28 in the UK, number 23 in Australia, number 18 in Ireland, number 14 on the US Billboard Dance chart, and number 8 in New Zealand.

"Round, Round" is next by Belouis Some, a new wave band who had a few popular tracks the previous year. It meshes well with the rest of the tracks, a key to any good soundtrack album.

The Danny Hutton Hitters re-record Nik Kershaw's hit "Wouldn't It Be Good" for the album. The original by Kershaw is one of my favorite songs from the 80's, but I feel this version gets some short-shrift by comparison. It is still a very good rendition. Hutton, if you didn't know, was one of the singers for Three Dog Night during the the 1970's.

"Bring On the Dancing Horses" first appeared in one form on Echo & the Bunnymen's 1985 album Songs To Learn & Sing. It appears again on the extended CD version of their 1987 self-titled album, with the song showing up under the name of "Jimmy Brown", with a slighly different musical accompaniment. The single went to number 31 in New Zealand, number 21 in the UK and number 15 in Ireland.

The album ends with the Smiths and "Please Please Please Let Me Get What I Want". This song was originally released as a b-side to their single "William, It Was Really Nothing" in 1984. As with a lot of these songs, Hughes must have sought it out to bring some extra attention to a song he enjoyed.
Posted by Martin Maenza at 3:32 PM