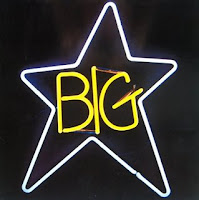 I'm actually listening to this album for the very first time tonight, as I got a copy of it on a CD as one of the birthday presents from my teenaged son earlier this week. I had picked out about a dozen CDs at the local Best Buy as possible gift choices; he picked three to give me. Big Star was one of them. One of my old friends from college suggested I check them out since this was the first band Alex Chilton was a part of. So, checking it out for this week's entry of "Seventies Saturday"...

Side one opens with "Feel", which feels a lot like a late 60's Beatles tune (a good thing). "The Ballad of El Goodo" follows - it reminds me a bit of Tom Petty and the Heartbreakers. "In The Street" is a tune I have heard before - I'm a fan of That 70's Show. I never knew who did that song (or bothered to check really) until tonight. Definitely a different version but I'm digging it. (Side note: one of the creators of that TV show - Mark Brazill - went to the same high school as me - graduated a few years before me. Some places in that show were based on places in our hometown.) "Thirteen" is next - I like this one a lot too. Reminds me of growing up in the 70's. "Don't Lie To Me" picks the pace back up in a style very popular by early 70's bands. The side ends with "The India Song", which is like a lot of early 70's soft rock like America and such.

Side two kicks off with "When My Baby's Beside Me" and "My Life Is Right", a pair of pop-rock songs. Of the two, I found the later to be a bit more appealing to me."Give Me Another Chance" and "Try Again" slow things down once more. "Watch the Sunrise" reminds me a little bit of Pure Prarie League with its strumming guitars and soothing harmonies. The album ends with "ST 100/6", a less than a minute track. It is sort of anti-climatic in some ways - feels like an after-thought if you will.

Not bad for a first time through it. I liked it well enough. I have a feeling it will grow on me more with subsequent listens, dropped into shuffle rotation on my iPod and coming up in the context of other 70's records.
Posted by Martin Maenza at 8:20 AM

I generally don't find myself following links in comments, but whilst perusing "Liz's 1001 Albums" I saw you'd dropped a review on this album, which I absolutely love.

Then I noticed you're in Hickory--and I was just out there visiting my parents! Small world, and all of that.