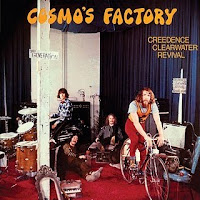 In the summer of 1970, the Fogerty brothers (John and Tom) along with Stu Cook and Doug "Cosmo" Clifford put out their fifth studio album, the classic Cosmo's Factory. This platter includes some of their most famous work - including three top-10 singles - and it appears on the "1001 Albums You Must Hear Before Dying" list as well as Rolling Stone's "Top 500 Albums of All-Time" (at position number 265). The band infused blues with a downhome, southern spin to create a musical masterpiece.

I am sure I heard a lot of this album growing up in the 70's - on AM radio, classic rock stations on FM radio, and from my older brother. I remember too getting into CCR a lot too when I went off to college in the early 80's. This was one rock album that seemed universally liked and enjoyed by all people. And rightly so - it is some great stuff. This is one of those albums that most likely is (and very well should be) in your music library.

For me, I'm rather partial "Travelin' Band", "Lookin' Out My Back Door" and "Run Through the Jungle" from side one, "Up Around the Bend", "Who'll Stop the Rain", and "I Heard It Through the Grapevine" (a smoking cover of Marvin Gaye's hit with that long, awesome drum-line played over and over) from side two.
Posted by Martin Maenza at 9:36 AM