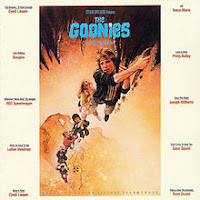 It was the summer of 1985 and I was living in Dover, NJ, while working a college co-op job for an information processing company. Since I knew very few people outside of work, I spent a lot of my free time on the weekend at the movies - often seeing two to four new films each weekend. One film that came out during that time was the Goonies, an action-comedy written by Chris Columbus, directed by Richard Donner and executive-produced by Steven Spielberg.


It was the story of a group of kids who end up in high adventure involving criminals, pirate treasure and a little teen romance thrown in. It starred Sean Astin, Corey Feldman, Martha Plimpton, and Anne Ramsey (among others). Given all those involved, you'd expect it to be a blockbuster. Was it a good film? Ah...that depends upon your definition of "good". Oscar worthy? Not by a long shot! It was fun though and a good distraction for a Saturday afternoon. It had that serial matinee feel to it.

But something that did come out of it was the soundtrack for the film, which I owned on cassette and played to death that Summer and Fall. The album was released on June 7th of 1985, and it went to number 73 on the US Billboard Album chart. It spent a total of ten weeks on the charts.

Side one of the album opens with the first of two songs by Cyndi Lauper - "the Goonies 'R' Good Enough". This bouncy song was in Cyndi's typical style - fun, energetic and very catchy. The song had not one but two videos on MTV at the time, with a story-line that paralleled the film in some aspects and even featured a cliffhanger between parts 1 and 2. Cyndi even had a cameo in the film singing the song. I like this one a lot. As a single, it hit number 49 in Germany, number 42 in Japan, number 22 in New Zealand, number 10 on the US Billboard Hot 100, number 8 in Australia, and number 5 in Canada and France.

Next up is a dance hit by a band called Goon Squad - "Eight Arms to Hold You". This was the band's only real hit, but it went to number 80 on the US Billboard R&B chart and number 1 on the Billboard Dance charts. The scene that featured it in the film ended up being cut for being too "cartoony" (Really? Too cartoony? The whole film had a cartoony feel to it - which is part of the film's appeal.). Still, the song has a solid beat and a catchy refrain to it. I can see how it was a big club hit at the time. Very 80's dance-like.

Track three is Philip Bailey's "Love Is Alive". He was coming off his duet with Phil Collins from the previous year ("Easy Lover") and his smooth soul vocals make this a good song - another dance tune.

The Bangles then check in with "I Got Nothing". They were coming off their debut album of the previous year, and this song bridges nicely to their 1986 release where they exploded on the charts. The song has that good-Bangles rhythm to it and their melodic harmonies. A very bouncy song that gets stuck in your head if you're not careful. And, is that such a bad thing? I think not.

Side one ends with Teena Marie and the song "14K", which went to number 87 on the US Billboard R&B chart. This is one of my favorite songs by her, as I have mentioned previously here on my blog. It stands up nicely next to her other popular chart topping tunes, and it fits with the film's theme of treasure hunting. I just love this song so much - it slightly beats out Cyndi Lauper's two tracks as my favorite on the album (but not by much).

The second side of the album kicks off with a slower tune by REO Speedwagon - "Wherever You're Goin' (It's Alright)". Even though the band was on their popularity decline at this point of the 80's, it is good song and in the vein of their previous hit songs. Like other artists on the album, they were on the Epic label and thus were picked because of that to add a tune to the film. Such was the nature of soundtrack albums.

Luther Vandross is next with "She's So Good to Me", another R&B/soul tune for the record. What I really like about this album is that it mixes up the styles nicely - it almost is like listening to pop radio at the time. You got a lot of different sounds coming at you in any given hour. It keeps things from getting dull. Luther's vocals are smooth, as always, and the backing music is typical 80's fare (and for me, that's a compliment since this is my favorite music decade).

Cyndi is back for round two with "What A Thrill". This song is a lot of fun too, with its fast pacing and rapid-fire vocals. It almost has a rock-a-billy feel to it. How can you resist from tapping your foot when you hear it? I can't. I think it is equally as good as her first song on the album if not a little bit better.

Next is "Save the Night" by Joseph Williams, who would take a turn as lead vocalist for Toto on a few albums in the mid-to-late 80's. It is standard pop fare, good vocals and music. The album then ends with the instrumenal "Theme From the Goonies" by Dave Grusin.

I still enjoy this album over twenty five years later. It captures perfectly that time and place I was in at the time of its release.
Posted by Martin Maenza at 1:42 PM