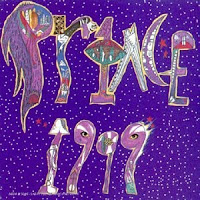 1999 was Prince's fifth album (and first double-album to book), released on October 27th of 1982. This was the album that really helped Prince cross over into the mainstream. A lot of that had to do with the start of MTV and the videos released for key singles. The multi-Platinum album went to number 9 on the US Billboard Hot 200, number 25 in Canada, number 30 in the UK, number 35 in Australia, and number 6 in New Zealand.

The album is on the "1001 Albums You Must Hear Before You Die" list and appears on two Rolling Stone magazine lists (number 212 on the Top 500 Albums of All-Time, and number 16 of the Top 100 Albums of the 80's). If you were a teen of the 80's, I know you have/had this one in your collection. If you didn't, I bet you knew someone who did.


I have to start by mentioning the album cover itself. How funky and off the wall is that? Very! Up to this point, each release featured a picture of Prince on the cover. This time, he went with a graphic approach (and I mean that in the literal sense - yes that is a phallic symbol you see there). This album was also the first to credit his band - the Revolution - on it. They (Wendy Melvoin, Lisa Coleman, and Dez Dickerson) would be a big part of the image as we were moving into the music-video age.

Let's break it down, disk by disk, side by side, track by track:

Side one opens with "1999", the pre-Armageddon party anthem. This first single hit number 25 in Switzerland, number 21 in Ireland, number 6 in Canada, number 4 in New Zealand, and number 2 in Australia. In the US, it went to number 12 on the Billboard Hot 100, number 4 on the R&B charts and number 1 on the Dance charts.

“Little Red Corvette”, the second track and single, went to number 54 in the UK, number 12 in New Zealand, number 8 in Australia and number 5 in Canada. In the US, it reached number 61 on the Dance Charts, number 15 on the R&B charts and number 6 on the Billboard Hot 100. The lyrics tell the tale of a one-night stand with a beautiful but sexually hungry woman. Lisa Coleman provided the backing vocals on this track.

The third single “Delirious” went to number 33 in New Zealand, number 27 in Canada, number 18 on the US Billboard R&B charts and number 8 on the Hot 200 chart. The blues-based rocker is about being totally enraptured to the point of craziness by a beautiful woman. The lyrics are full of sexual metaphors.

These three are probably the most known songs from the album since all were released as singles. Together, they form a triumvirate that is guaranteed to kick any party into high gear. With them all being on the same side, it was easy to queue these babies up back in the day to get everyone dancing.

Side two starts with "Let's Pretend We're Married". This fourth single went to number 55 on the US Billboard R&B chart and number 52 on both the Billboard Hot 200 and Dance charts.

With more sides to play with, Prince was clearly experimenting with the longer tracks on this album and this side is a good example of that. Clocking in at seven plus and eight plus minutes, these tunes really allowed he and the band to work out the grooves nicely.

Side three begins with “Automatic“ which was released in Australia only.

"Something in the Water (Does Not Compute)" was the B-side to the Australian only single.

The first two tunes on this side have a computer/machine feel to them in tone and subject matter. Remember, this was the early 80's when home computing was a very novel concept. Up until that time, computers were only used by big companies. The home PC revolution was not fully mounted just yet.

Speaking of revolutions, the third track "Free" is a powerful piano-ballad that makes a strong statement about patriotism. It is Princes way of reminding his fellow Americans that we should remember to count our blessings.

Side four leads off with "Lady Cab Driver", an all-out sexual romp in the back of an automobile.

"All the Critics Love U in New York" brings back the dance for one more time.

The final side is definitely the most sexually charged side of the album (but, we are talking about Prince - so a majority of the songs have sexual over-tones to them). The man never made any bones about the topic. He sang about it with open, in-your-face, honesty - and equally often in the down-and-dirty manner. That's what makes early Prince stuff so enticing. He sang about the things that were on peoples' minds but were too afraid to reveal that side of them. As he sang about it on his previous album, it was all about sexuality. Prince had it in spades (still does).

I would be remiss to talk about his album without also talking about the original songs that appeared on B-sides of singles. There are three that come from this album.

"How Come U Don't Call Me Anymore?" was released on back of "1999". It is an excellent slow-jam with a strong guitar line where Prince inquires as to why his lover no longer dials him up (yeah - like that ever happened to him! Probably not.).

Lastly, there is "Irresistible Bitch" from the "Let's Pretend We're Married" single. It too is very catchy and very much in style/tone as the rest of the songs from this period.

The release of 1999 was timed with the start of my Senior year of high school. I was a huge fan of his Royal Purple Highness (having gotten into his earlier stuff from the local college radio station that prior summer). These were my jams and everyone who knew me knew that. I played my original vinyl copy to death. When I got a CD player in 1990, this was one of the first albums I bought in the new format. I keep a copy of it on my iPhone and iPad so that I can listen to it any time I want (if my iPod isn't handy). In short, I love this album!

I couldn't even begin to pick my most favorite from this album; they are all gems in my book. Of the dozens upon dozens of albums he's put out in the past 30 or so years, this one easily ranks in my top 3 of Prince albums (and easily in the top 20 of all-time albums in my collection of hundreds).
Posted by Martin Maenza at 5:59 AM