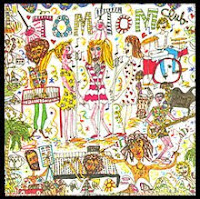 Tom Tom Club is the 1981 self-titled debut album from Talking Heads band members Chris Frantz and Tina Weymouth, and it charted at number 78 in the UK, number 23 on the US Billboard Album chart and number 18 in New Zealand. The husband and wife team decided to to this side project with a number of other musicians, and the album earned them a place in the "1001 Albums You Must Hear Before You Die" list. The mix of percussion, guitars, keyboard and vocals by Weymouth and her three sisters form a creative musical explosion.


Side one of the album began with "Wordy Rappinghood", the album's first single. It charted at number 105 on the US Billboard chart, number 35 in New Zealand, number 17 in the UK, and number 1 on the US Billboard Dance charts. I love its typewriter rhythm and quirky vocals.

The next single release from the album was "Genius of Love". It went to number 65 in the UK, number 31 on the US Billboard Hot 100, number 28 in New Zealand, number 24 on the US Mainstream Rock chart, number 2 on the US Billboard R&B chart, and number 1 on the US Billboard Dance chart. The song has amazing bass-line which has been sampled by many artists over the years - most successfully on Mariah Carey's single "Fantasy". This is my favorite track of the album by far, with "Wordy Rappinghood" coming in second.

A short instrumental called the "Tom Tom Theme" is next. I'm not really a fan of interludes like this (under a minute and a half); I would rather see other songs extended. It really feels like an intro to the next tune, "L'Elephant", which is okay but doesn't make a lasting impression on me. Maybe if the lyrics were more engaging. Ah well.

Side two of the original LP kicked off with "As Above, So Below", a track that is welcome after the previous two.

"Lorelei" further brings back up my mood, with its ethereal vocals and haunting refrain.

"Booming and Zooming" is the last track on the original album. I am not a fan of this song at all - again, another track that doesn't do anything for me.

I am not surprised at all that the cassette release of Tom Tom Club replaced it with a cover of the Drifter's 1964 hit "Under the Boardwalk". The Tom Tom Club released the later song as a single after the vinyl release (perhaps the reason for the substitution/inclusion on later format releases) where it charted at number 31 on the US Billboard Dance chart, number 22 in the UK and number 3 in New Zealand.

The CD version of the album also adds a remix of "Lorelei" and long versions of "Wordy Rappinghood" and "Genius of Love". The three songs, in these formats, were very popular dance club tracks at the time.

My familiarity to this album and some of its more prominent tracks extends back to the early 80's when I was listening to a lot of college radio stations. I was instant fan of the trio of dance tracks that came from it. I owned a cassette of the album in the 80's and it was one of the early CDs I got (when I added a five-disk CD changer to my stereo system on Christmas 1990). I'm kind of split on the album - loving three of the tracks, liking four of the tracks, and very much dislking two of the tracks. Averaging it out, it makes it just a good album at best for me. It is one where I'll likely cherry-pick on what I'll listen to rather then play the full thing through.
Posted by Martin Maenza at 8:23 PM