Adam and the Ants - Kings of the Wild Frontier 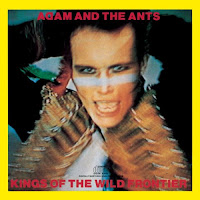 I have my older brother to thank for my first exposure to Adam and the Ants and, in particular, this album - Kings of the Wild Frontier (1980). Besides being one of "the 1001 Albums You Must Hear Before You Die", it happens to be my favorite by the group. It was the second of three albums the band did before Adam went off to his solo career. The combination of the dual drums, the driving guitars and, of course, Adam Ant's unique vocal styling make for an early new wave masterpiece.


Chart-wise, the album went to 44 on the US Billboard Album chart, number 18 in Austria, number 7 in New Zealand, number 4 in Sweden, and number 1 in the UK.

The album kicks off with "Dog Eat Dog" and establishes the sound for the album - the signature twangy guitar of Marco Pirroni. This single went to number 22 in Australia, number 19 on the US Billboard Dance chart, number 15 on the US Billboard Mainstream Rock chart, and number 4 in the UK.

"Los Rancheros" is the next track on the side one of the US release (flip-flopped with song four "Feed Me To The Lions"). I love the whole spaghetti-Western feel to it.

"Feed Me to The Lions" goes in another direction - adding to the variety of the music on the album. I like how the band experiements with the sound the four-instrument combo gives them.

"Press Darlings" appears on the US release as a statement about the bands' relationship with the media. Adam would touch this subject again later in a solo effort with "Goody Two Shoes".

"Ants Invasion" has a great intro to it - wonderful guitar work through out.

The side ends with "Killer In The Home", a piece the marries haunting vocals with very moody guitars.

Side two kicks off with the title track and first single from the album (which went to number 48 in the UK and number 19 on the US Billboard Dance chart). "Kings of the Wild Frontier" has another solid drum-rhythm, almost a tribal beat to it.

I'm not as big a fan of "the Magnificent Five" track - it's not a bad song, just not one of my favorites. The way numbers go, someone's gotta be in the bottom of the ranking of tracks, right?

"Don't Be Square (Be There)" has a nice funky intro to it that I like. I also like that they manage to work in the title of the first album into the lyrics ("Dirk Wears White Sox").

"Jolly Roger" is the shortest track on the album, but it is my favorite of them all. Something about the pirate theme, the whistling and the rowsing chorus makes this one irresistible to me. It is a definite five-star on my iPod.

The album rounds out with "Physical (You're So)" and "the Human Beings". With thirteen songs on the album, again you're going to encounter some that aren't as favored. For me, these two fall into that category as well.

All in all, though, the album holds up rather well. It is a good mix of enjoyable tunes that I like to listen to over and over again (either as a whole or as they pop up on a shuffle).
Posted by Martin Maenza at 5:48 PM