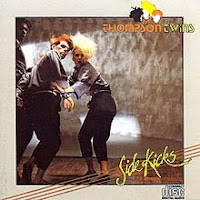 On January of 1983, the Thompson Twins released their third album Quick Step and Side Kick in the UK. Here in the US, the album came out on February 18th of that year under the simplified title of Side Kicks (their second release here). It went to number 2 on the UK charts and number 34 on the US Billboard Hot 200.

The US track listing is a bit different than the UK order; I'm going to review the tracks on the album in the order I know them (apologies to all my International readers).


The first track on side one is "Love On Your Side". As the second single, it went to number 80 in Australia, number 45 on the US Billboard Hot 100, number 27 in the Netherlands, and number 9 in New Zealand, Norway and the UK. I love how all the layers interact in this one - from the vocals to the percussion to the synthesizers. Very representative of the band.

"Tears" is a song about putting on appearances, even if you can't hide the truth. It has an interesting rhythm to it, supported by what sounds like a section of horns (synthesized, of course).

What I love most "Lies" is its cascading rhythms of the ancient orient (six times every time, each one lowering the octave) It is too cool. It is certainly my favorite track from the album. I even used the title for a poem I did in a college poetry class I too (the poem listed twenty six things that were not true about me). The single for this song hit number 67 in the UK, number 30 on the US Billboard Hot 100, number 27 in Australia, number 6 in New Zealand, and number 1 on the US Dance charts.

"We Are Detective" has a film-noir feel to it, with the lyrics, with a touch a paranoia thrown in too. It has a little bit of a carnival carousel sound to the music too. As a single, it went to number 48 in New Zealand and number 7 in the UK.

"Love Lies Bleeding" finishes off a completely solid first side.

Side two begins with "Watching" and its haunting chorus that adds to the paranoia theme a bit. On the UK charts, it peaked at number 33.

"If You Were Here" is really the first slower tune on the album, and it works very well to convey the emotion of the lyrics.

If I had to rank tracks, "Kamikaze" would probably fall as my second least favorite track of the ten. It isn't that it is a bad song. Far from it. In a lot of ways it reminds me of Thomas Dolby's "Airwaves" song (they have similar sounds to them). No surprise as Dolby worked with the band on their 1982 album Set, so I am sure some of his tricks wore off on the band.

"Judy Do" gets the least favorite track on the disk. For me, it just doesn't stand out as much as the other songs. But, again, it is not a bad song really.

The record ends with "All Fall Out" which has more innovative sythesizer layers to it.

This was the album that really introduced me to the British synthpop trio (previously the group had seven members - with this album they were down to their more familiar line-up of Tom Bailey, Allannah Currie and Joe Leeway). Suffice to say, they quickly became favorites of mine.

I had this album on vinyl back in the day (bought at our local Record Giant store). Many of the songs from it became part of the soundtrack of the later part of my senior year of High School and my Freshmen year of college. College radio embraced the entire album. The US Billboard charts got a taste of them too, via the tracks released as singles ("Lies", "Love On Your Side"). I know I personally played this one very often; I even taped the tracks to a cassette to listen in my car and on my boombox.

I long since gave up all my vinyl (back in the mid-90's) when my turn-table gave up the ghost. I didn't have enough vinyl to make investing in a new one worthwhile and the CD format was in full-bloom. So I unloaded all of my vinyl on my brother, who cherry picked a few things he wanted and gave-away/sold the rest. However, I never managed to pick this one up on CD (I don't even know if it was ever released in that format in the US market). When I got into digital music for my iPod, I had a good number of the tracks on a greatest hits CD. But, I was still missing some of the deeper cuts. Searching high and low on the various usual places (iTunes, Amazon, emusic) did not yield fruit. I was disappointed that I couldn't get some of these tracks again.

That all changed this past weekend.

I was visiting my parents and going through my brother's albums. There was my copy of this album, much to my joy. He also recently got one of those devices that allows you to burn your vinyl to CD (back in the mid-90's I never even would have thought such a device might ever exist - if I had I wouldn't have given up on my stuff). I grabbed a blank CD-R and went to work retrieving the tracks I needed (along with some b-sides from some of my old 45's that he had kept). Even though the record skipped occasionally in spots, I still got the tracks onto a CD and, later when we returned home, converted to MP3s via iTunes. Now I feel some completion again as I can listen to this album in its entirety - just like I did back in the day. Isn't technology wonderful? I think so!


What I like about the Thompson Twins is they deliver complex end-product with each song. With Side Kicks, the band is exerimenting with different sounds and styles to make varied and interesting music each time. I don't think the songs sound alike at all. I also pick up new nuances with each repeated listen, which makes this an album I want to listen to over and over again. That is probably why I have been doing just that for the past twenty-eight years.
Posted by Martin Maenza at 6:13 AM