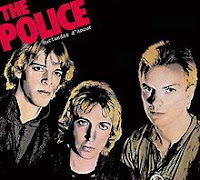 Outlandos d'Amour is the November 2nd, 1978, debut album of the Police. The trio of British rockers is made up of Sting (bass, vocals and harmonica), Stewart Copeland (drums), and Andy Summers (guitar). This Platinum selling album charted at number 23 on the US Billboard Hot 200, number 22 in Canada, number 15 in Australia, number 6 in New Zealand and the UK, and number 2 in France and the Netherlands. It holds the number 434 position on Rolling Stone's "Top 500 Albums of All-Time" list.


Side one begins with "Next To You", a song very much in a punk vein.

"So Lonely" is next with a bit of a reggae beat to it. Released as the third single, it charted at number 10 in France, number 7 in Ireland and number 6 in the UK.

"Roxanne", one of the Police's best known songs (it is number 388 on Rolling Stone's "Top 500 Songs of All-Time" list), is all about a red-light district prostitute. Such postive subject matter for a rock song, eh? But, admit it, you sing along with it every time you hear it. I know I do. As the first single, it charted at number 32 on the US Billboard Hot 100, number 31 in Canada, number 22 in Ireland, number 21 in the Netherlands, number 12 in the UK and number 8 in France.

"Hole In My Life" dips back into the reggae beat, again touching upon the subject matter of loneliness. Hmmm, I see a theme here. These guys needed to get out more, eh?

"Peanuts" ends the first side with a more peppy-sounding tune that again goes to that punk vein. Sting barks the song's title like someone at a carnival trying to sell a salty treat.

Side two of the original LP kicks off with "Can't Stand Losing You", a song about love lost. As the second single, it went to number 7 in Ireland and France, and number 2 in the UK. The lyrics and music work very well with this one, getting it caught in your head.

That theme continues in the next track, "Truth Hits Everybody". But the tempo is different, keeping the album from getting boring and too-same-sounding.

"Born In the 50's" is a generational song where Sting and Copeland comment on things related to them and others their age.

"Be My Girl - Sally" features Andy Summers on lead vocals, in a song he penned about a blowup doll. It is more like a poetry reading really, an odd ode if you will.

The album ends with the mostly instumental "Masoko Tanga". The "lyrics" are mostly gibberish with the occasional recognizable words or phrases.

What I personally take away from this debut album is clearly this was a band with varying different musical ideas. They have a lot of tastes they like to draw from - rock, punk, reggae, jazz, etc. It was sort of a buffet if you will, and certainly with a different spin that what was typcially going on in music at the time (disco, arena rock, etc.). This was a nice omen of things to come - from a band that would put out some great music together in the short time they were a group.
Posted by Martin Maenza at 6:41 AM