Orchestral Manoeuvres in the Dark - Architecture and Morality 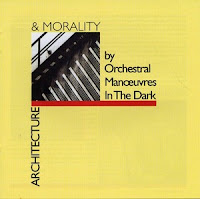 The November 8th of 1981 release Architecture and Morality by Orchestral Manoeuvres in the Dark (OMD, for short) was their third album release and one of their most successful commercially and critically. The Platinum seller went to number 144 on the US Billboard charts, number 22 in New Zealand, number 8 in Germany, number 3 in the UK and number 1 in the Netherlands. It also appears on the "1001 Albums You Must Hear Before You Die" list.


This is not an album I own myself. I have about three tracks from a greatest hits collection, so I sought out a web streaming service (thanks, Grooveshark!) to fill in the blanks so I could do this review.

Side one begins with "The New Stone Age", a song that didn't appeal to me at all. I think there was too much going on musically that it started to sound like a big mess.

"She's Leaving" sounds more like the OMD I had grown to love in the later part of the 80's - with their signature vocals and instrumentation. This is a track I will need to seek to download at some point.

"Souvenier" builds slowly from a quiet intro and has that synthpop sound that I grew to enjoy in my high school years (around the time of the album's release). It was also the first single off of the album, charting at number 57 in Australia, number 39 in Germany, number 38 in the Netherlands, number 9 in Ireland, number 6 in Canada and number 3 in the UK.

"Sealand" ends the side, and it is mostly a slow, sleepy instrumental track. I couldn't get into it at all.

Side two kicks off with "Joan of Arc" and is followed by "Joan of Arc (Maid of Orleans)", the second and third singles from the album. The charted at number 78 in Australia, number 7 in New Zealand, number 5 in Ireland, number 4 in the UK and number 1 in both Germany and the Netherlands. I like these two tracks as well, and both are very different despite what they share in common in name.

The title track "Architecture and Morality" is back to the instrumental mode, which really didn't leave much of an impression on me.

"Georgia" is back to the OMD style I do like - that catchy pop sound. Again, this is another one I would seek out for download if the price were right (emusic.com doesn't have much OMD yet).

And I just knew "the Beginning and the End" would kind of go back again towards the less interesting for me.

To me, the album was almost a little bi-polar, two sides of a very different coin. It is like it can't decide if it wants to be a pop album (as the singles would emphasize) or more of an artsy musical album ala the work of the Moody Blues or the Alan Parsons Project. I really only liked half of Architecture and Morality, the other would be tracks I would skip over entirely if they came up. Ah well. They can't always all appeal to me. Your mileage may very.
Posted by Martin Maenza at 10:18 AM

You're right, the album is equal parts pop and art, which, for me at least, was and continues to be the appeal of Orchestral Manoeuvers. I recall hearing this album when I first bought it and thinking some of the same things as you, especially re: The New Stone Age. Weird stuff.

But over the years and repeated listens, I've come to love most every song on the record. It's a gorgeous album and while not as in-your-face pop as their later records in the 80's, it's lush and beautifully done. I'm glad that you & Liz took the time to dig them out. :)

Sam, welcome and thanks for the comments. Look forward to hearing more thoughts on music from you.