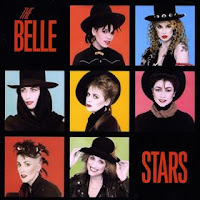 In 1980, an all female British rock band formed in London when a ska band called the Bodysnatchers broke up. The group included Jennie Matthias on lead vocals, Sarah Jane Owen on lead guitar, Stella Barker on rhythm guitar, Miranda Joyce on alto saxophone, Clare Hirst on tenor saxophone and keyboards, Lesley Shone on bass and Judy Parsons on drums.

It would take a few years of hard work playing locally, a half dozen singles released on Stiff Records, and a four song EP called Another Latin Love Song (click here for that review) before they'd put out their only full long-playing record. That album was the self-titled the Belle Stars which was released on January 28th, 1983, and reached number 15 in the UK charts on February 15th, 1983.


Side one kicks off with "Sign of the Times" with its catchy opening guitar riff. It has a 60's Motown feel to it, which is very complimentary. In fact, they sound a lot like those classic girl groups from that decade.

"Ci Ya Ya" is next with its spy-movie-meets-ska feel.

"The Clapping Song" follows, a cover of a 1965 Shirley Ellis tune (which has been covered by many artists over the years including Pia Zadora and Aaron Carter). The Belle Stars version reminds me of girls chanting the lines while playing jump rope in the playground.

"The Harlem Shuffle" gives us another 60's cover tune - this time 1963's R&B hit by Bob & Earl (covered successfully in 1986 by the Rolling Stones). It is nice to hear a girl-group doing it.

"The Reason" completes the side with its sexy saxophone sounds.

Side two kicks off with another cover "Iko Iko" (originally done by the Dixie Cups in 1965, and later covered by Cyndi Lauper on her second album).

It is followed by "Baby I'm Yours", a dance tune with a solid rhythm.

"Mockingbird", a cover of the 1963 song by the Inez and Charlie Foxx, and later done by James Taylor and Carly Simon in the 70's). Again, by hearing this by an all-girl group you get that school yard feel to it. A nice change from a duet.

"The Snake" tells the story a deceptive man, a sort of Biblical kind of tale.

"Burning" is another dance track with a disco kind of beat.

The album ends with the solid "Needle In a Haystack", showcasing again the band's strong percussion line and blended harmonies.

I'm a big fan of the girl-groups across the decades. The Belle Stars probably don't show up on most people's musical radar which leads them to be a little underappreciated. They remind me a lot of the early Bananarama stuff.

While I was familiar with a few of the songs by the Belle Stars from college radio days, I really got into them a couple years ago after joining emusic.com. I was able to score the 2004 collection Belle-Issima! which included all the songs from their EP, this album and a few of the non-album singles too boot. All for just 12 credits. Sadly, the album isn't available there any more (and emusic has since switched over from credits to pay-cash-for-tracks format). Still, it was a great find at the time and a fine addition to my music library.
Posted by Martin Maenza at 7:40 PM