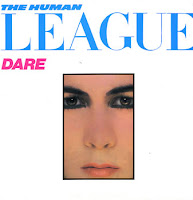 The third album by the British synthpop band called the Human League is Dare, released in the UK in late 1981 and in the US in mid-1982. It appears on both the "1001 Albums You Must Hear Before You Die" list and Rolling Stone's "Top 100 Albums of the 80's" list (appearing at number 78 on the later list). This album marks the band's change from an avant garde form of music to a more pop-centric approach. It is said to be a cornerstone of the new trend in pop music of the 80's and an influence to a lot of acts since.


Personally, I became familiar with the band from the hit single "Don't You Want Me" which played all over the radio during 1982. I picked up one of the Human League's EPs in 1984 and another album in 1986, mostly to get a couple hit songs I liked. I even saw the band perform as part of the "80's Rewind" tour along with Howard Jones and Culture Club in the late 90's. I was truly amazed to see that they did everything using computers and keyboards - which posed a little problem when that evening's thunderstorm kicked up (it was an outdoor pavilian show) and a lightning strike caused all the power to go out briefly; they apologized to the audience for the delay while everything rebooted but they wanted to give us their complete set. I recall it was good, as was the rest of the show.

Since my Twitter-friend Liz is doing the 1001 Albums challenge (www.1001albums.com) and reviewing this album, I thought I would do the same. Like her, a lot of this will be first impressions for me as the first time hearing the majority of these songs. Let's see what we've got.

The album starts with "The Things That Dreams Are Made Of", a solid opener. I like the list of things mentioned that dreams are made of. "Open Your Heart" is next, the first single released in the UK specifically from the album. I like it too with its cascading sounds. "The Sound of the Crowd" was a single that came out in the UK prior to the album released, and it was re-recorded for Dare. It didn't as much of a first impression on me as the first two songs, but it wasn't by any means a bad song.

The fourth track is "Darkness". It shares some common traits to songs by Soft Cell, which I truly enjoy. "Do Or Die" would have finished off side one of a traditional album. Listening with headphones gives a great effect from the backing sounds. "Get Carter" is a short instrumental interlude (under a minute) which leads then into "I Am the Law", a song inspired by the character Judge Dredd from the British comic book 2000 AD. I am familiar with the character but didn't read much of that book back in the day. It does seem to fit though with what I remember about it - moody, somber and dystopian.

"Seconds" is about the assassination of John F. Kennedy in 1963. It was okay - not one that I'd be very hot to listen to very often. "Love Action (I Believe In Love)" was another single released in the UK prior to the album debut. Again, liked the music on this one. The lyrics were okay as well, but lacking a little something to make it a hear-it-often track.

The album ends with the aforementioned "Don't You Want Me", the band's biggest hit single that reached number 1 on the US Billboard charts in the summer of 1982. The song has a he-said-she-said take to it, as a couple gives both sides of a relationship. It is very much a culmination of what comes before it on the album, and very obvious as to why it was the big hit from it. When this song comes on the car radio, I find myself singing along with it (both parts) - just like I did back in high school when the song first came out.

I have to say, upon a single listen, there are a few tracks I would probably want to hear again soon. I'll need to consider doing some downloads from Amazon.com or iTunes, or maybe investigate the CD option (based on what I am looking for).
Posted by Martin Maenza at 4:53 PM