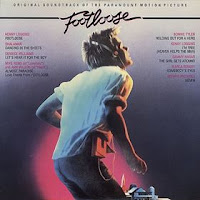 On January 31st of 1984, the cold chill of the winter was driven away by the red-hot energy of the film Footloose. This film (with stars Kevin Bacon, Lori Singer, Dianne Wiest, John Lithgow, Christopher Penn and Sarah Jessica Parker) was the story of a Chicago teen coming to a smalltown in the Bible-belt and discovering that music and dancing are pretty much forbidden. The message of the film - the power and importance of music (and dance) was a strong one, and the key to part of that was a kick-butt soundtrack album.

The album was a chart topping monster. It reached the number 1 position on the US Billboard Album chart in late April of 1984 and held that spot all the way through the end of June (two and half months). It also went to number 21 in Canada, and number 4 on the US Billboard Country chart. Six of the nine tracks cracked the top 40 charts, with two of the tracks reaching the number 1 spot.

Side one begins with the title track by Kenny Loggins; "Footloose" went to number 1 on the US Billboard Hot 100 and held that spot for three weeks. It also went to number 1 in Canada and New Zealand, number 4 in Switzerland, and numbe 6 in the UK. From the opening notes, your feet start tapping and they just don't let up for three minutes and forty six seconds. This song was guaranteed to kick any party in 1984 into high gear. How could you not want to "cut loose" after it?

It was followed by "Let's Hear It For the Boy", an equally infectious dance number by Deniece Williams. It too hit number 1 on the US Billboard Hot 100, a spot it held for two weeks. Elsewhere, it charted at number 19 in Switzerland, number 10 in Germany, number 3 in Canada and Belgium, number 2 in the UK and Ireland, and number 1 in Canada. Together these first two songs were a powerful one-two punch right out of the gate.

Next up, Ann Wilson (of Heart) and Mike Reno (of Loverboy) team up for "Almost Paradise", an ever-present slow dance number that year and a perrenial prom theme since. These two veteran 70's rockers meshed well vocally; the duet is perfect for karaoke as well. It went all the way to number 7 on the US Billboard Hot 100.

The side finishes off with Bonnie Tyler and her power-rocking "Holding Out For a Hero", a single which peaked at number 34 in Canada and on the US Billboard Hot 100. You can feel the energy of that tractor stand-off from the film on this one, with Bonnie's vocals and the building orchestration taking it to a whole other level.

Side two leads off with Shalamar's "Dancing In the Sheets", another big dance favorite of the time. The single for this one went to number 41 in the UK, number 18 on the US Billboard R&B chart, number 17 on the US Billboard Hot 100 and number 9 on the US Billboard Dance charts. The suggestion of the song was a great come-on, pick-up line out the clubs. Did it work? I'm sure it had its fair share of success as well as a good percentage of failure.

Kenny Loggins returns with "I'm Free (Heaven Hels the Man)" with its bounce and liberating vocals. The single for this one peaked at number 31 in Canada and number 22 on the US Billboard Hot 100, number 19 in Germany and number 2 in the UK.

Karla Bonoff is next with "Somebody's Eyes", another solid tune that gets caught in your head. Karla's vocals are sweet.

We then move on to Sammy Hagar and his rocking "The Girl Gets Around" - the song that serves as a theme to Singer's character, the rebellious daughter of the town preacher. I easily put this into the category of Sammy's greatest hits - from his solo days before jumping on the Van Halen train (I prefer David Lee Roth, in case you were wondering, as VH lead singer - but I digress...).

The album ends with Moving Pictures and "Never". The Australian band had been around since the late 1970's, but this track was really their biggest exposure to the US listening audience.

I was in my Freshmen year of college when this soundtrack came out, and these songs could be heard everywhere at the time. On the radio, blasting from dorm rooms all over the quad, at every dance, in the bars and clubs - these songs were omnipresent. Sometimes you'd hear two, three, four or five of them all in the span of an event in a single night. And everybody seemed to love them. We didn't care that we owned the album/cassette - we always seemed happy to hear the songs again and again. They were the soundtrack of the Spring and Summer of 1984. For me, personally, this album is an all-time favorite from the decade.
Posted by Martin Maenza at 12:57 PM

I came this close to going and renting the movie this weekend after reading your blog. I haven't seen it in years.

I ended up renting SHOWGIRLS and THE RUNNING MAN instead. Don't judge. . .

I have the DVD for this film as well. It is one of those films that if I run across it on TV I will stop and watch it from wherever it is until the end.

And, don't worry - I won't judge you on your film choices. Remember, I'm the guy who likes Xanadu, Can't Stop the Music, and Grease 2 - all candidates for upcoming "Soundtrack Sunday" posts, FYI. You've been warned. ;)

Footloose is featured on the Friday Film Fest at HERC's Hideaway this week.

Even though I was still in high school at the time, I completely agree that this was a monster in the Spring and Summer of 1984, heard and seen everywhere. Until Purple Rain came out.

Blake Shelton does a decent job on the title track but the rest of the soundtrack - or what's left from the original soundtrack album - is almost unlistenable IMHO.

I have not seen the 2011 version. I figure why mess with a classic.