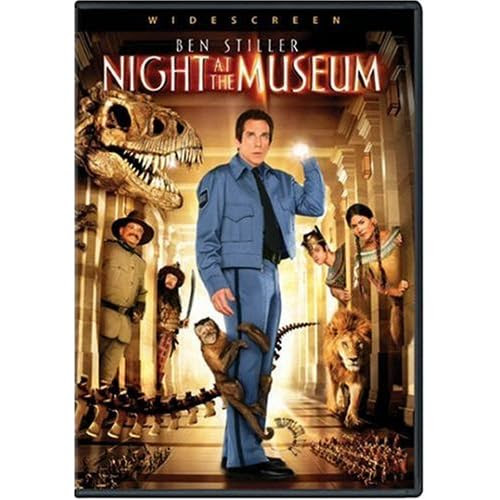 For about six weeks now we've had Ben Stiller's 2006 comedy A Night At the Museum sitting on our DVR. My son had seen it twice through school but my wife and I had not seen it at all. So, last night she and I finally had time to sit down and watch it. We thought it was cute.

Stiller plays a divorced father who is trying to find a steady job. He lands one at the NY Museum of Natural Science as a night watchman. Thing is, the other guards (played by Dick Van Dyke and Mickey Rooney) fail to tell him about the strange things that happen in the museum at night. As they say, "the history comes alive at night" - literally!

The film was enjoyable. The special effects worked very well. It was a nice family film that could be enjoyed by young and old alike (hard to say that these days). It was also nice to see veteran Hollywood legends like Van Dyke, Rooney and Stiller's mother Anne Meara (in a small cameo role) getting work. I also enjoyed Robin Williams' and Owen Wilson's roles in the film. It's a nice film to catch if you hadn't seen it in the theatre.
Posted by Martin Maenza at 11:41 PM

Email ThisBlogThis!Share to TwitterShare to FacebookShare to Pinterest
Labels: A Night At the Museum, films