Birds of Prey: Blood and Circuits 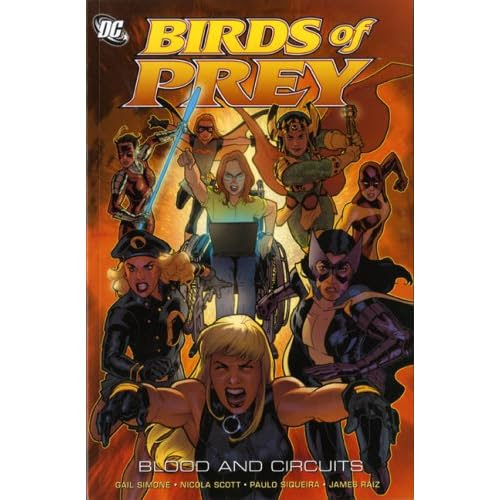 I used to be a regular reader of the Birds of Prey comic - up until issue #47 in fact. That was the time that series creator Chuck Dixon left the writing chores. I decided then to drop the title.

However, recent interest in the new Secret Six comic had me thinking I should pick up back appearances of the villain team. I already had Villain's United and wanted to get their Six's trade and their previous appearance in BOP.

That lead me to getting the BOP volume prior to that one - Blood and Circuits. This trade covers issues #96 to 103 (from 2006 and early 2007). I enjoy Gail Simone's writing on other books and found it equally enjoyable here. The first arc in this volume - when the team goes to try to protect Black Alice from being recruited by the Secret Society of Super-Villains was a good one. This then leads into a change in the status quo for the team as one long standing member departs and others are brought in. This bringing in of others leads to some bigger headaches for Oracle.

If you love adventures featuring smart and competent super-heroines, this is a book to try. The writing is witty and fun. I'm planning on back filling on the other BOP trades prior to this one as well - which could get me almost all the way back to when I stopped picking up the floppies. Those cover Gail's run as writer on the book.
Posted by Martin Maenza at 4:39 PM