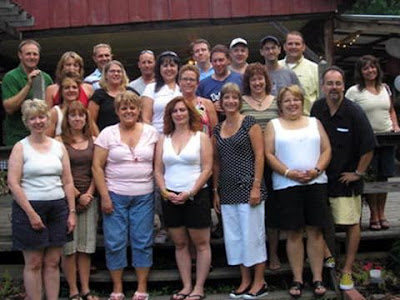 Just outside of Dunkirk, in the small town of Forestville, is the Merritt Estate Winery and that was going to be the site for our 25th class reunion picnic. The drive to there didn't take long at all, about fifteen minutes total. There are a lot of small towns and villages around Dunkirk - each with their own character and charm. A lot of my classmates remained in the area, moving about a ten to twenty mile radius away from the town we all grew up. Some moved a bit further up towards Buffalo which is only about a forty minute trip away to the north or towards Jamestown which is about the same time distance to the east or towards Erie, PA, which is about that time distance to the south (can't go west of Dunkirk as that puts you smack dab in the middle of Lake Erie).

Of course, I was styling for the picnic. I had found a pair of black and yellow checkered Vans sneakers while on vacation in Gaitlinburg, TN, a few months back. When I found the store had the shoes in my size, I knew I had to get them. They were so 80's and perfect for the class of 83's reunion. On that same trip, I managed to find a pair of yellow dress shorts to go with them. The weekend prior to the reunion, we went shopping in Greensboro, NC, and I found a black silk shirt to complete the outfit. I was very psyched!

The winery offered a number of aspects that made it a perfect site for our party. First and foremost, they do their own catering and have a covered pavilion with picnic tables for eating. This would have been crucial if the weather had done what was original forecast - scattered thunderstorms. Luckily, there was a brief shower around noon and then the sky cleared by the time the picnic began at 2pm. We got a slight sprinkle at 7pm, just the the picnic was ending. Someone upstairs was watching out for the class of 1983.

There was also a large grassy yard area, perfect for games like volleyball, soccer, horseshoes, etc. for the kids to play. After all, it was a family picnic and one of the first times in the four reunions we've had (5 year, 10 year, 20 year and now 25 year) where we've done something where we could bring the kids. Folks asked about it after the 20th (as we've done the formal dinner/dance a number of times). It worked out absolutely perfect. Everyone got to bring along their kids to show them off. The kids instantly took to one another and began playing together without much proding from the adults. It was kind of neat to see the kids of classmates I grew up with all the way back in elementary school forming good bonds (like my son and my friend Denice's son, both of whom are nearly the same age, who wandered off to the nearby creek for a treasure hunting adventure).

The third great aspect of the winery was the winery itself. This was perfect for the spouses and significant others. While the classmates all got together to chat about old times, they were able to go up and do tours and wine tasting. That kept them busy. We even brought back a half case of wine to North Carolina as my wife managed to fine a few of the winery's offerings that she found tasty. My wife was also able to spend time discussing wines and European travel with Nikki, a friend of my friend Lynette, so she was kept entertained for the party.

For me, the best part of the picnic was being able visit in a more relaxed, quiet setting with the 29 classmates who signed up for the picnic. Out of a class of 252 graduates (minus those we've lost over the years), this was about a 12% showing. Not bad really. Given economic factors like the cost of gas and plane tickets, I can see it would have been hard for some folks who were scattered across the country to make it back. Also, a number of folks had conflicts (prior family commitments, etc.) that prevented them from coming back for the reunion. It would have been nicer to have a few more of the folks who stayed local to come, but again I am sure scheduling and such prevented them to do so. On the flip side, the smaller number insured plenty of time to catch up with everyone over the five hour period.

A number of people at the picnic I had seen at the bar the night before. But there were also new folks as well.

I've known Colleen (Shubert) since elementary school. Also, her father was and still is the golf pro at Shorewood Country Club; Jack was the person who taught me how to golf when I was a kid. Colleen and I would see each other all summer, hanging out at the club and playing in the Junior Golf tournaments and such every Friday morning. Ironically, we now live less than two hours apart since she and her family moved to SC from Vegas and my family has relocated to the western part of NC.

I didn't make it to the golf tournament that Gerry Hall coordinated for earlier that morning at Shorewood. I haven't swung a club in ages and more likely would have embarrassed myself more than anything else. Gerry said they had about a half dozen folks that came out to play. He's been a member of the club for years now and remembered my mother.

Ed Balzer and his family also made the trip up from NC (they live even closer to me, just in Charlotte). I believe they actually had come up for a week to visit. So glad they could make the trip up (hopefully they didn't hit the same road issues we did - I'm guessing they would have driven up the same way).

Mike Goulding was another of our classmates who had been living in NC (on the coast). I saw him a few years back but it was good to see him again. "Spike" is now living in Minnesota, a place my wife is familiar with (she has family there). He has yet to endure one of their winters. He'll be in for some interesting times compared to the temperate Carolina winters.

Linda (Hollander) and Karen (Dimmer) are two more folks I've known since elementary school. Both now live closer to Buffalo and made the trip down for the day with their families just for the picnic. I hadn't seen either of them in a long long time. Karen and I talked about our brothers who were of similar ages and often hung out together. My brother often went to the Dimmer household to play poker. That's one of those things about growing up in a small town - you have a lot of connections through different ways and means. I guess that was one thing I loved about Dunkirk and that I miss - that small town feel of everyone knowing everyone.

Other people who still live in town or nearby who I have not seen in ages were Tom Thompson, Gina (Campese), Bill Matteson, Linda (Medley), Michelle (Polchetti), and Mary Jo (Galardo).

About 5pm or so, we all gathered at the tables. Gary gave a little speech and awarded the door prizes (first RSVP went to Gerry, last person signed up went to Kimberly, longest distance travelled was a tie between our two Florida residents - Deb and Dianne). Gary also announced that as of 7pm he was officially retiring as our reunion planner (he has been involved with the last three). Somehow I think he won't be able to stay away from the plans for the next one - he does such an awesome job! Plus, I have a feeling he'll be getting quite a bit more help from a number of us both local and distant. We all enjoy these gatherings so much to let them end at the 25th.

During the last hour of the picnic, someone had the great idea for us to get a class picture to commemorate the event. Arming the spouses with cameras, the 22 of us who remained got together for a group shot. After about a dozen shots, we finally got it perfect. It was a great way to mark the event and the turn-out for an absolutely perfect event.